NASA's MESSENGER spacecraft that is in orbit around Mercury has detected the presence of water-ice in the permanently shadowed craters at the North Pole of the planet. Other craters that had part of their interiors permanently shadowed were detected to have water ice as well - the pic below shows where these deposits are located.

Scientists estimate there could be anywhere from 100 billion to 1 trillion tons of water-ice locked in the frozen depths of the craters. That is enough water to cover Washington D.C. to a depth of 2 miles!

This is the same result we found at the South Pole of the Moon - water-ice locked in the frozen depths of craters that have never seen the presence of sunlight.

What's more, the presence of complex organic compounds was found as well at Mercury perhaps covering the water-ice. Sounds a lot like the result of numerous cometary impacts to me - water-ice and organics all mixed in. Read More About It: http://science.nasa.gov/science-news/science-at-nasa/2012/29nov_iceonmercury/

Tomorrow we'll discuss the Curiosity announcement onDec.3 that is being downplayed byNASA.

Posted by Sky Guy in VA at 7:12 AM No comments: Links to this post

What an INCREDIBLE pic from Cassini at Saturn: Go to the mission web site to learn more about the pic and the ringed planet Saturn:

Tomorrow before dawn check out the eastern sky to see brilliant Venus and Saturn very close to one another - about a degree will separate the two:

Then notice as the days go by how quickly the two separate in dsitance.

Tonight's Full Moon will be high in the sky in the later hours of the evening and will light up the darkness.

Ever notice how things look in moonlight, especially in the winter if there is snow on the ground?

It is one of my favorite things to see - a bright Moon high in a clear sky with winter being seen in the moonlight.

If you look to the left of the Moon tonight, and especially tomorrow night, brilliant Jupiter keeps our orb very close company.

Enjoy the view﻿, in the sky as well as on the moon lit ground.

Watch a cool movie on a sunspot's changes as it moves across the Sun....http://www.uclabruins.com/sports/m-footbl/mtt/mora_jim00.html

Take a look at the recent Australian total solar eclipse with a cloudy accent: http://science.nasa.gov/science-news/science-at-nasa/2012/23nov_cloudyeclipse/

Pretty cool. We will have a total solar eclipse in the U.S. in 2017 - hopefully with clear skies!

Email ThisBlogThis!Share to TwitterShare to FacebookShare to Pinterest
Labels: Total Solar Eclipse with a Cloudy View

Word is that NASA will have a news conference on December 3, 2012, to announce the Curiosity results that has the community buzzing about.

See my blog for 11/21/12 for the background about this developing story.

NASA has put together an excellent story on our Milky Way Galaxy's black hole that resides at the center. Astronomers have been able to capture the beast feasting on matter composed of possibly gas, planets, comets, asteroids, etc.

So while we in the U.S. celebrate Thanksgiving, take a moment to learn how our Galaxy's black hole beast feasts http://science.nasa.gov/science-news/science-at-nasa/2012/22nov_backholesnacks/

I do not know if you have heard, but there is news going around that NASA will be announcing "an earthshaking" announcement soon regarding Curiosity data.

Several news outlets have picked up on this and there was an NPR interview of one of the main scientists who stated that the discovery is coming from soil analysis, but would say nothing more - http://www.npr.org/2012/11/20/165513016/big-news-from-mars-rover-scientists-mum-for-now.

Mars has burned NASA before as to announcements that had to be essentially retracted - the most famous being the Mars meteorite that NASA claimed had what they described as  organic compounds in it.

Well, NASA is biding its time with this announcement as it is probably checking and rechecking the data and results.

What could it be?

The most "earthshaking news" possible would be that Curiosity had found actual active life forms in the soil; next would be that fossils had been found and thisrd, may be that the necessary precursors for life - chemicals, amino acids, water, etc, etc are common in the Martian soil. Methane in the soil might be another possibility as life forms on Earth produce Methane.

Whatever it is, it will probably be weeks before we hear as the holidays are upon us and even NASA takes time off.

So we will just have to wait to see what is in store for the history books......

Posted by Sky Guy in VA at 9:47 AM No comments: Links to this post

Check out this incredible panorama of Gale Crater:

Posted by Sky Guy in VA at 10:37 AM No comments: Links to this post

The newest "farthest galaxy" has been found by NASA space telescopes. The red blob on the graphic is 13.3 BILLION light years away and is a very young galaxy much smaller than our own Milky Way Galaxy. The Universe was only 420 million years old when this galaxy formed.

The large galaxy cluster allows astronomers to see this distant island of stars due to the magnifying effect caused by the cluster's gravity. If it weren't for this effect of Einstein's relativity we probably wouldn't be able to see the baby galaxy. Read More ABout It: http://www.nasa.gov/mission_pages/hubble/science/distance-record.html

Tomorrow morning before dawn is the predicted peak of the Leonid Meteor Shower. Viewers in a dark sy sit could see 15-20 per hour.

Bundle up, get comfortable and face the east a couple of hours before dawn focusing in on the constellation of Leo the Lion as shown in the graphic. Keeping WARM will be crucial to enjoying the experience.

Read More About It: http://stardate.org/mediacenter/Leonid_Meteors_2012

Tour The Milky Way Galaxy With a New Google App

Google has come out with a new application that needs to run on Google Chrome which allows you to tour the Milky Way Galaxy in splendid detail.

The app, called 100,000 Stars, is beautiful to see and fun to explore. It is a combination of imagery and excellent art work but has solid science at the foundation.

Touring with it gives you a real sense of the size of our stellar neighborhood.

Check it out here: http://workshop.chromeexperiments.com/stars/

Email ThisBlogThis!Share to TwitterShare to FacebookShare to Pinterest
Labels: Tour The Milky Way Galaxy With a New Google App

Looks like we will be getting a new sci-fi space flick sometime in the near future called "Europa Report".

Been a long time since we had a space flick - Apollo 18 and Prometheus were the last ones by my recollection.

The trailer looks cool and there are some interesting PR sites for the movie too - http://www.europaventuresllc.com/ and https://www.google.com/search?q=Life%20on%20Europa%202011

No release date yet, but looking forward to it.

Get more details about the eclipse here: http://science.nasa.gov/science-news/science-at-nasa/2012/07nov_totaleclipse/

Posted by Sky Guy in VA at 10:15 AM No comments: Links to this post

Sign Up for Free ISS Sighting Alerts From NASA

NASA is offering a free service that allows you to get email-tetxt alerts on when the International Space Station (ISS) will be visible from your specified location.

It is SO COOL to see the ISS glide silently by, especially when it is a high overhead and therefore bright, flyby.

Email ThisBlogThis!Share to TwitterShare to FacebookShare to Pinterest
Labels: Sign Up for Free ISS Sighting Alerts From NASA

Here is an interesting story on how asteroid belts make a definite contribution to the conditions necessary for life as we know to exist and evolve.

Posted by Sky Guy in VA at 8:08 AM No comments: Links to this post

Email ThisBlogThis!Share to TwitterShare to FacebookShare to Pinterest
Labels: Asteroid Belts and Life

Everything You Wanted to Know About Infra Red Light

Want to learn all about infra red light - the heat of the Universe????

Check out this fantastic learning video from NASA Goddard http://www.nasa.gov/topics/technology/features/webb-beyond-vis.html

This will be very imporant in the James Webb Space Telescope - Hubble's follow on in space.

Email ThisBlogThis!Share to TwitterShare to FacebookShare to Pinterest
Labels: Everything You Wanted to Know About Infra Red Light

Sorry for the political bent on this blog entry but I wanted to make sure that everyone in the USA that sees this gets a nice reminder to vote tomorrow.

This is a very, very important election for the U.S. and every single vote matters.

I will be doing so the very first thing in the morning so I know my vote is in and counted.

Sky Guy in Crucial State VA
Posted by Sky Guy in VA at 8:01 AM No comments: Links to this post

Read the Latest on Vesta

DAWN is on her way to Ceres but the research and findings about the time spent at Vesta are still to come.

One of the results is that Vesta has a "young" surface - one that is constantly being churned by countless impacts.

Self Portrait From Mars

Pic says it all! See the full resolution pic at 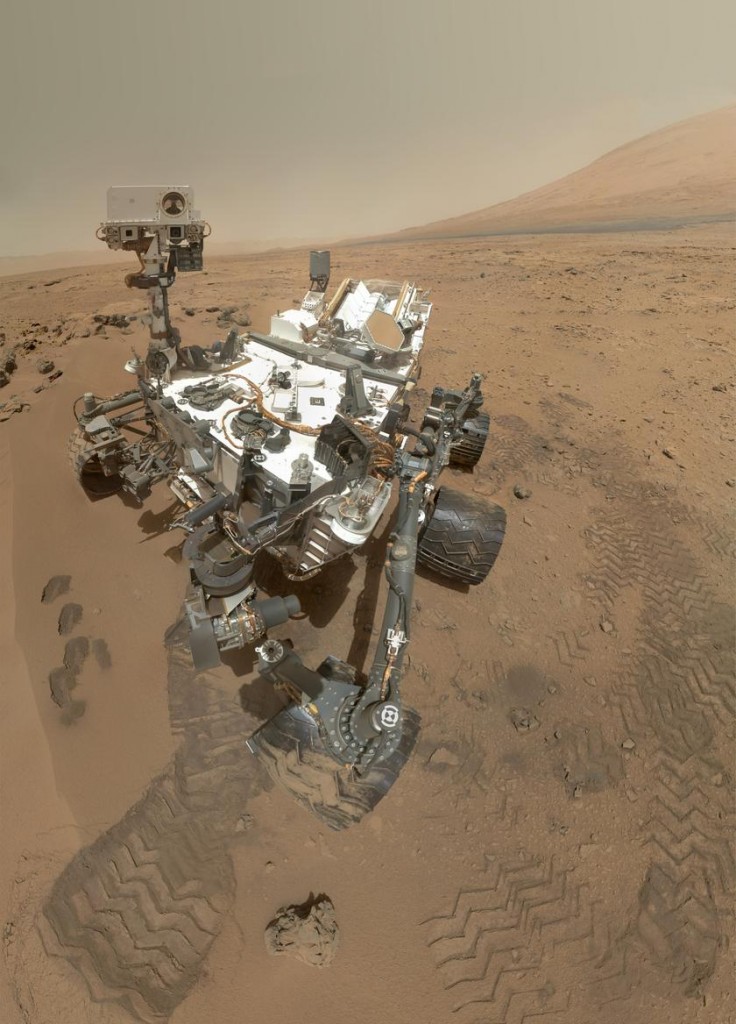 Email ThisBlogThis!Share to TwitterShare to FacebookShare to Pinterest
Labels: Self Portrait From Mars

A real viewing treat is in store for you tonight as the waning gibbous Moon joins Jupiter and reddish Aldebaran in the East well after it gets dark.

Use binoculars to view each of them and get an appreciation of the scale of our solar system and Galaxy - Jupiter is 1,500 times farther away than the Moon. Aldebaran, to their right, is 930,000 times more distant than Jupiter!

Your binoculars will show the main moons of Jupiter as well.