Been tough getting on the 'net - sorry.

Here is all of the info on Orion/EFT-1 for 12/4/14 http://www.nasa.gov/press/2014/november/nasa-sets-prelaunch-activities-television-coverage-for-orion-flight-test/

Sky Guy Just Left Sardinia
Posted by Sky Guy in VA at 5:01 PM No comments: Links to this post 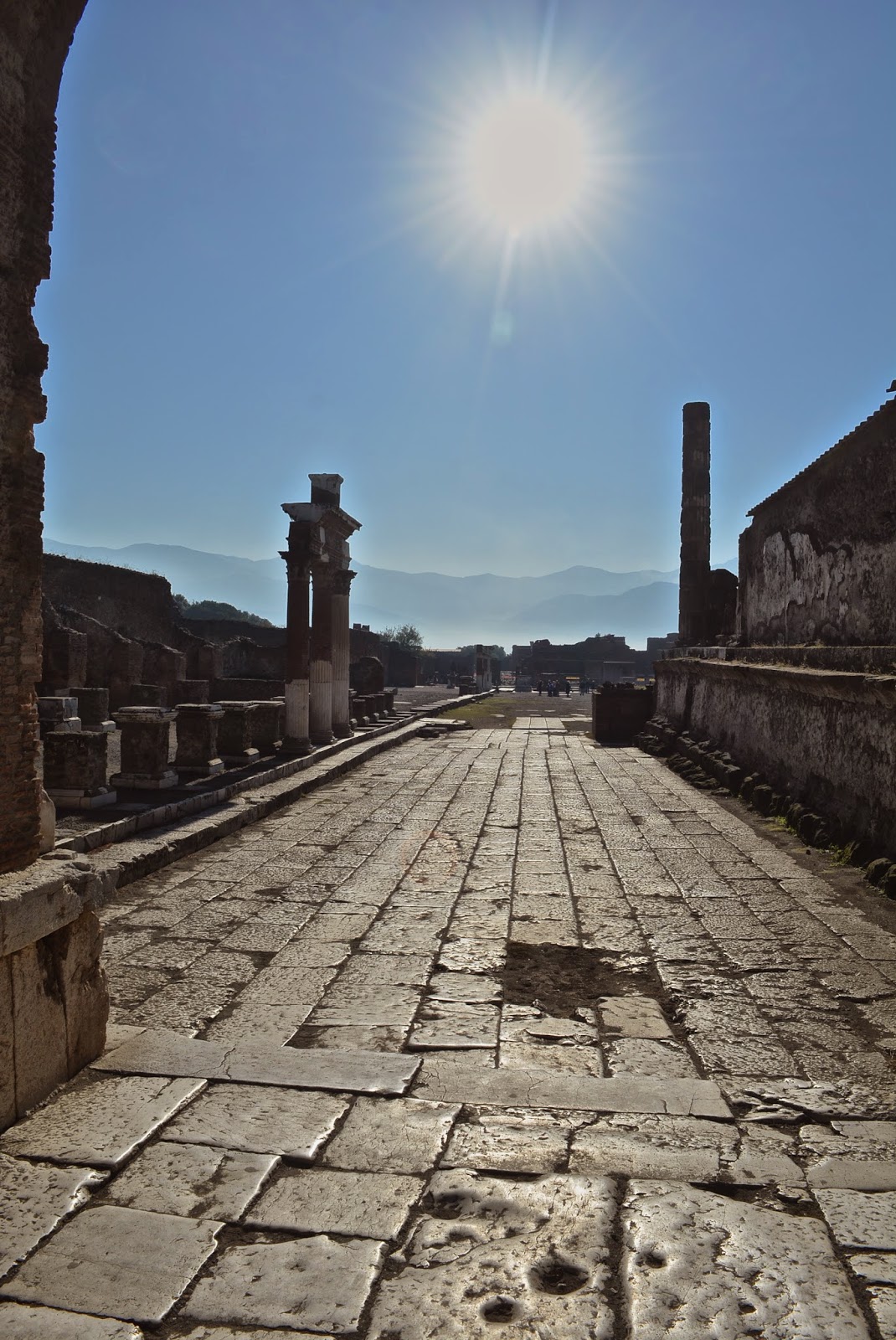 Enjoy this pic of the ruins of Pompeii which was destroyed 1,935 years ago by the eruption of Mt. Vesuvius.

Sky Guy in Italy
Posted by Sky Guy in VA at 5:59 AM No comments: Links to this post

Email ThisBlogThis!Share to TwitterShare to FacebookShare to Pinterest
Labels: Ruins of Pompeii

Thank You For the 2 MILLION+ Page Views!

THANK YOU to each and every one of you that has visited my blog - all TWO MILLION PLUS OF YOU!!!

I m in Rome and will be boarding Holland America's Maasadam tomorrow for a 21 day transatlantic voyage giving 9 lectures.

Enjoy this pic of the Roman Coliseum at night. 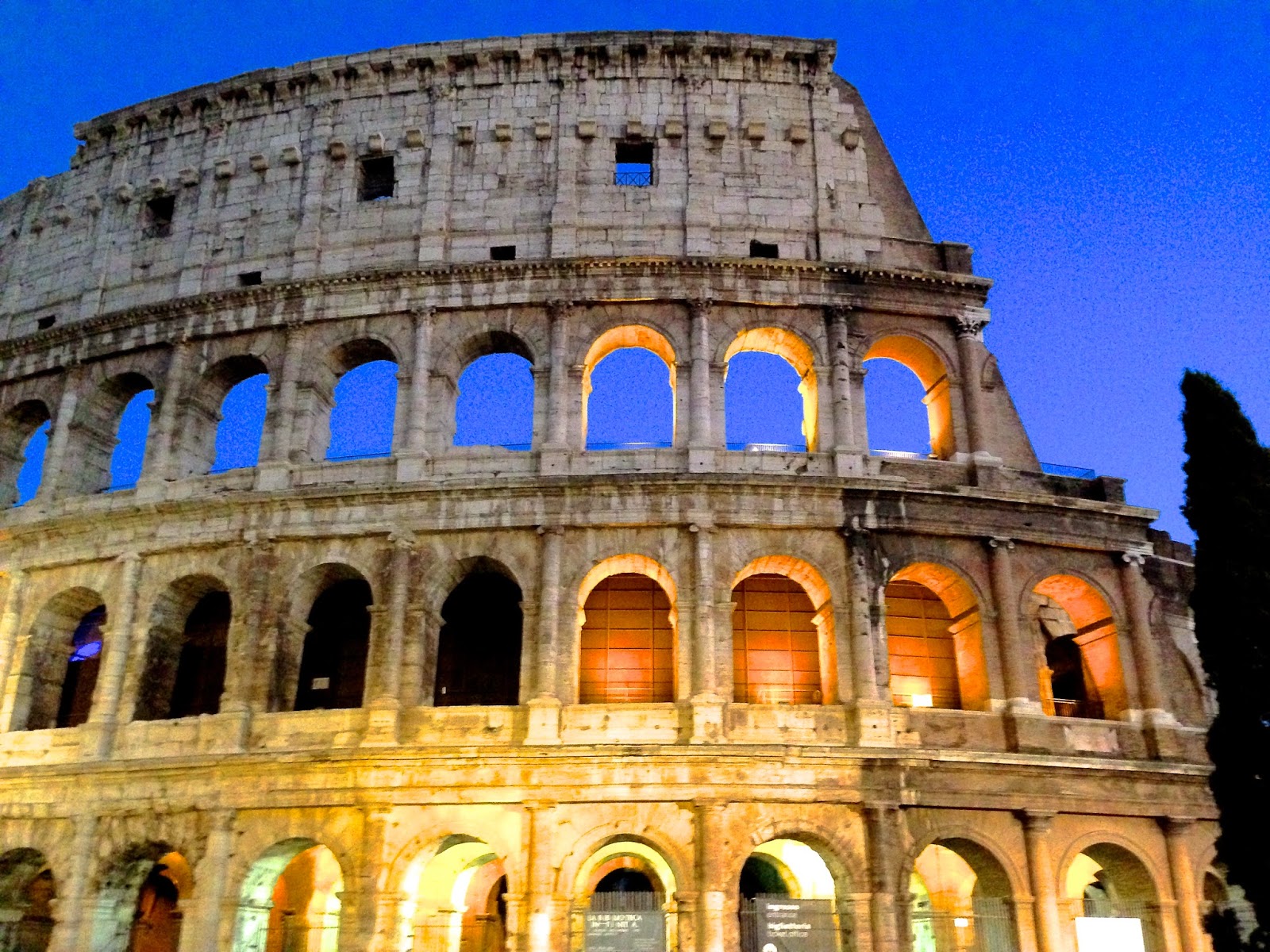 Here's to the next million page views!

Sky Guy in Rome
Posted by Sky Guy in VA at 12:17 PM No comments: Links to this post

Leaving For Another Atlantic Crossing

I am leaving for another Trans-Atlantic crossing,  Rome to Florida abroad Holland America's Maasdam. This is a multiple weeks run and I am hoping to get Internet so I can stay in touch with you.

Be sure to mark your calendars for the 12/4/14 scheduled lift-off of Orion - see my previous blogs.

I will be following the mission of Exploration Flight Test-1 as best I can while at sea.

Be sure to follow me on Twitter - @SkyGuyinVA - as that sometimes gets through better than my blog.

Sky Guy in Soon To Be Record COLD VA - Probably
Posted by Sky Guy in VA at 11:04 PM No comments: Links to this post

Gear up to brave the cold and see the Leonid Meteor Shower on Monday and Tuesday starting at midnight until dawn.

Get all the details here and I wish you clear skies and a high meteor count.

Here is the latest from ESA on intrepid Philae.

I sure hope that the plucky little spacecraft that could gets enough solar energy on her solar cells to power on again - especially as Comet 67/P gets closer to the Sun. Eventually Philae will be no more as the high temp from the Sun will do her in.

Philae accomplished all of her data return which will rewrite the books on cometary surfaces.

The main spacecraft, Rosetta, is in great shape and will continue data collection as the comet nears the Sun.

My Review of the Movie Interstellar

Well, I finally got to see the movie 'Interstellar' today. I saw it in IMAX and I had to wear earplugs for most of the movie as the sound was WAY TOO LOUD!!! During the launch and space scenes I actually felt the sound waves in my chest…..

There have been reviews on the science - right and wrong - in the movie as well as what movie critics think of it.

Quite frankly I think I will be telling you things that I have not read so far about 'Interstellar'. To me there was a match up of things and themes in the movie to present day.

To start off I think everyone interested in space should see the movie just for the visuals. They are exquisite and on par with what we saw in 'Gravity' but a tad more active in that the space scenes go to places other than Low Earth Orbit (LEO) - just like present day NASA is trying to do with the Orion/Space Launch System (SLS).

I was amazed to see what is clearly a Saturn V launch vehicle used to launch an advanced wormhole transiting spacecraft into space.

The spacecraft used to go to and fro from orbit to the surface and vice versa reminded me of the Sierra Nevada Corporation's "Dream Chaser" spacecraft. This was especially my thought in scenes when looking down the side view of the spacecraft in the movie.

The movie hit upon some anti-science themes that were the norm for the society depicted. Most notably was the history book citation that we never landed on the Moon, that it was all propaganda designed to outwit the Soviet Union.

With the mentioning of the Soviet Union I can't help but think of how we are now reverting back to Cold War ways in our time - Russia says they will be sending strategic (read nuclear capable) bombers to patrol areas in the Caribbean and elsewhere near the U.S. All because of tensions over the insanity in Ukraine.

The main themes I picked up from the movie is how the most basic of human emotions - love and individual survival - showed the worst and best of humans. The power of love is described as possibly being a force that transcends space-time and can guide humanity in ways never before thought of, perhaps even to save humanity from the climate disaster befalling the planet.

Well, this made me think of climate change and how it is now and will be affecting the planet and humanity. What is happening to Earth and humanity in the movie is what spurs the characters to the stars in hopes of finding a new world to inhabit.

My thought in seeing all of this in the movie is that we have to take care of this planet we are on - together. There are NO other worlds nearby that can afford us the same benign (for now) living conditions. I doubt that there will be a wormhole that appears in the solar system that can be used to go to another galaxy to explore possible planets for colonization.

Here is the simple truth - we cannot continue to propagate and exploit the planet like we are doing. There is going to be a tipping point in numbers of human beings that the planet can support in terms of food (like the movie), water and resources. We just can't keep up the way we are going - we can't.

This movie more than any other sic-fi space flick I have seen made me think of the present more than the timeframe depicted in the movie. My guess is that the peril faced by humanity in the movie transcends to current day.

I don't know where humanity is headed unlike what happens in the movie which has a good ending and I'll leave it at that.

I can't say the same for present day humanity, the good ending part that is. What I can say with total conviction is that our efforts in space bring out the best we have in us. With all of the turmoil from war and evil that abounds in our world this is still the golden age of space exploration.

We sail the sea of space like never before to destinations and mission that astound us. The future of humanity is in the stars and it must be reached from our continued habitation of Mother Earth.

To get elsewhere in the Universe it will be from here. The best and worst in us will be competing to see which part of us wins.

That is the message I got from Interstellar.

Email ThisBlogThis!Share to TwitterShare to FacebookShare to Pinterest
Labels: Interstellar - The Movie

Here is the live feed from ESA 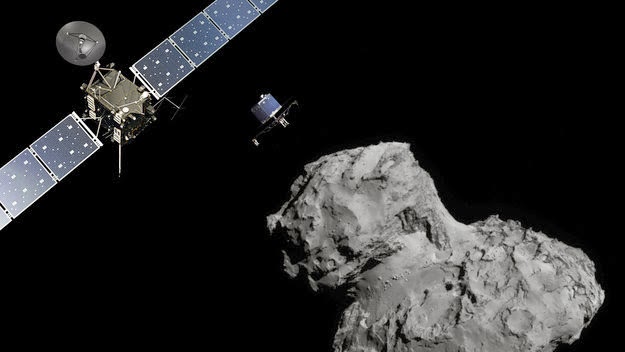 After 10 years and 4 billion miles, preparations by the European Space Agency (ESA) are underway right now for tomorrow's landing attempt by the Rosetta mission's Philae lander on Comet 67/P.

ESA is live streaming on the mission now.

The world will be holding its collective breath as this washing machine sized lander attempts to do what has never been done before - safely land on a comet. If successful, and this landing is by no means assured of success due to the hazardous conditions that will be encountered, Philae will conduct at least several days of science observations. The lander will photograph, sample and dig into the surface of the comet to analyze pristine cometary material.

The world should know if the landing was successful at 11:02 am EDT as that is when the touchdown signal will be received at Earth. That will be seven hours after detaching from the Rosetta orbiter.

NASA is flying 3 of the 16 instruments on the mission and NASA TV will begin live coverage at 9 pm EDT on 11/12/14. Be sure to tune in to history being made as it happens! 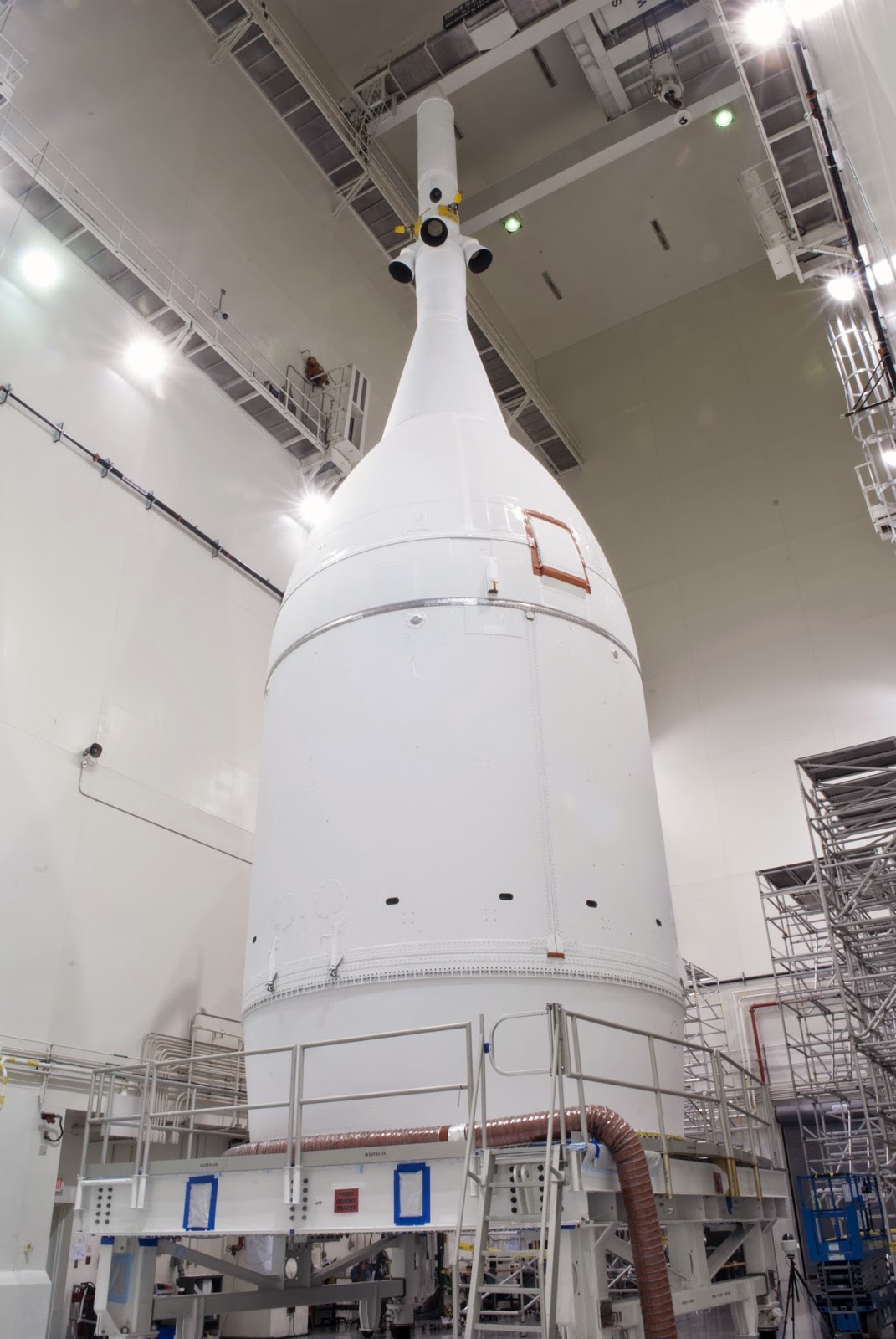 NASA TV will have a live broadcast starting at 4:30 pm EDT to provide a briefing. There will NOT be live coverage as the process will take until the early morning hours of Tuesday to be completed.

NASA plans to have file footage available on Tuesday morning.

I can hardly wait…..I will be at sea or I would be there to see EFT-1 launch.

Take a look at this stunning video of the International Space Station (ISS) put together by a talented admirer of space.

I muted the music…….

Enjoy the view in a dark room on as big a screen as possible. The Milky Way, Northern Lights, Moon shots and Earth shots are really quite amazing.

I'm Back…Watch This Video on EFT-1

Got back from Barbados via Toronto, Canada late last night. Sorry about the lack of blog entries but it was difficult to upload while at sea.

I have been catching up on email and getting ready for the next cruise in a scant few days. I am hopeful that I will be able to stay in touch with you.

There is MUCH going on next week with the roll out of NASA's first spaceflight ready Orion, the landing of Rosetta's Philae Lander on Comet 67/P and who knows what else might happen. I'll have blog posts for you, rest assured.

Sky Guy Back in VA (Temporarily)
Posted by Sky Guy in VA at 5:56 PM No comments: Links to this post

This is the week to spot the elusive planet Mercury. Details here.

Here is my pic of Mercury from the Atlantic.

Sky Guy
Posted by Sky Guy in VA at 8:46 PM No comments: Links to this post