For centuries comets - those cosmic snowballs left over from the formation of the solar system - were hunted and found by dedicated amateur astronomers using telescopes with an occasional photographic find.

Want to know who has found the most comets in history? The answer is not a human hunter, but a spacecraft that monitors the Sun! 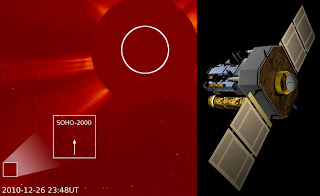 NASA/ESA's Solar and Heliospherical Observatory - SOHO for short - discovered its 2000th comet on December 26th. Citizens monitoring SOHO via the Internet have searched images from the Sun watching spacecraft to find many of these sun grazing comets.

Read More About It:  http://www.nasa.gov/mission_pages/soho/comet-2000.html.

Maybe you can find one!