Calm After the (Solar) Storm

The strong solar radiation storm and large CME (see my 1-24-12 post) have come and gone. The media response was superb as here in DC I did radio and TV segments and the printed media had good, solid stories. So a lot of people now know our Sun can have an impact on their lives and space weather matters.

There were some flight diversions around the polar regions and the auroras lit up the Arctic Circle but I have not read about any satellite, GPS, power grid or communication disruptions. It might have been different if the CME had been a direct hit instead of a glancing blow.

I have read some opinions that the upcoming/ongoing solar maximum may be an active one. If so, there is a good possibility that the Northern Lights - aurora - will make it down to the lower latitudes in the northern hemisphere. This happened last October when auroras made it down to Atlanta and Florida!

I have seen the Northern Lights twice in my life, once in Minnesota and once in Virginia. The Virginia episode was during the last solar maximum and I have included the picture that I took out in a decent dark sky site west of Washington, DC. As you can see this particular appearance had a definite red tint to it. I took it on October 30, 2003. 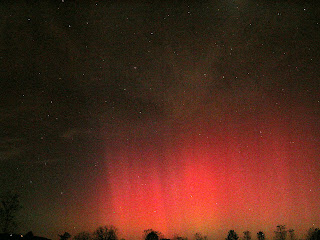 The place to check on aurora visibility is here: http://www.swpc.noaa.gov/pmap/index.html. Regardless of your location, you can see if the aurora cone encompasses your location. If it does, I would be outside when it is dark and looking north!

What surprised (and pleased) me a bit was that I read or heard of no doomsayers picking up on this perfectly normal and natural event to tie it in to "the 2012 End of the World" nonsense.

We'll be watching the space weather as we do our Earth-bound weather and will issue a "Sky Guy VIEWING ALERT" if the auroras come our lower latitude way!