My Night Under the Stars

Last night, 1/15-16, I took out my 10-inch Takahashi Mewlon 250 telescope and Nikon D 5000 camera. The night promised to be clear and cold and delivered on both. I had viewed the Sun earlier in the day and saw two sunspots coming over the Sun's eastern limb that had been reported to be active. The seeing - steadiness of the atmosphere - was lousy so I didn't take any pics.

As darkness and the temp fell, I started out by viewing Venus. Again, the seeing wasn't that good butI took a few pics. Venus is featureless to the eye and was in a gibbous phase. I then looked at Jupiter which had all 4 moons present and took a few pics with somewhat better seeing.

I then viewed the great nebula in Orion, M-42, through the camera only and took two pics - one at 30 seconds so I could capture the heart of the nebula, the famous Trapezium cluster of 4 new O-B stars that illuminate the nebula and a longer one of 60 seconds to capture fainter details of this great stellar nursery. I have posted them here for you to see. 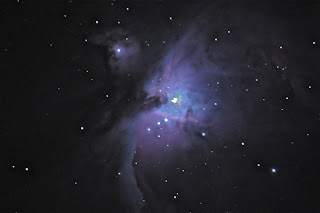 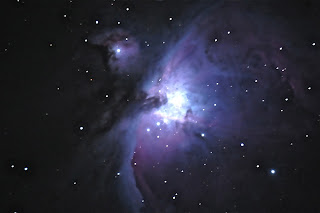 I then took pics of some of the brightest stars in the sky - Sirius and Beteleguese, and some star clusters.

Mars, Saturn and the Moon were well up in the sky so I looked at them. The view of Mars was the best I have ever seen with my own eyes. I could see the polar cap, some markings - it is easy to see why astronomers in the 1800's thought Mars had canals - and the rust color. The view is only going to get better as we get closer to March when Mars is closest in this current cycle so I didn't take any pics.

Saturn was a delight as I could see bands on the planet similar to those of Jupiter, the planet's shadow on the face of the planet and of course the gorgeous rings. I saw the famous Cassini Division and traced the rings quite easily around the planet.

The Moon was just after last quarter and was full of craters and shadows along the terminator. I took some pics but will have to work on them to clean them up. The seeing wasn't that great for [ics but was great for visual observing.

The temp got to my camera battery and my feet as it gout down to an icy 16 degrees. The Mewlon's tube was coated with ice as was the tripod. The eyepieces were so cold that just getting close to them to view would cause them to fog up for a bit.

I could hear geese on the nearby lake and howls of dogs and perhaps the whiff of a skunk someplace. The sky and Earth were quiet in the cold darkness before dawn and I took in the view of the sky in the east and saw Vega of summer fame. The spring star Arcturus was high overhead and reminded me that the seasons come and go no matter what occurs in human affairs.

A last glimpse of the stars and I thought of all the planets that exist around them. I wondered if anyone was looking at their sky on those worlds.

Email ThisBlogThis!Share to TwitterShare to FacebookShare to Pinterest
Labels: M-42, My Night UNder the stars, star party