Astronomers are sure an ocean exists under the surface ice of the Jovian moon Europa. The ocean is thought to be about 60 miles deep and circles the entire moon.

Observations using the Keck Telescopes in Hawaii and their powerful adaptive optics which compensate for the blurring of telescopic images due to the Earth's atmosphere, has revealed new information about the surface of Europa. 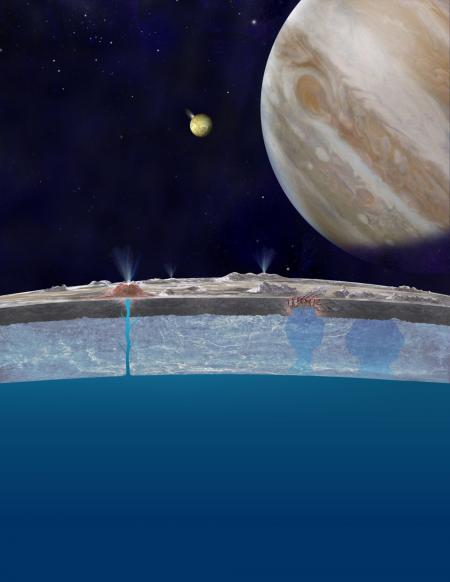 Astronomers now believe that they can learn about the unseen ocean by studying the surface of Europa which has had breaks in the ice. These areas where a fracture or break has occurred allows the flow of material from the ocean to the surface where it eventually freezes.

Analyzing the light from Europa's surface using spectroscopes attached to the telescopes allows for the identification of minerals and elements that are present. A brand new discovery was made recently when this combination of telescope-adaptive optics-spectroscope-analysis was used for the Europa observations.

A very subtle dip in the obtained spectrum of Europa was noticed and after further speculation and analysis it was identified as the mineral magnesium sulfate salt. This doesn't come from the ocean but helped to lead scientists to the conclusion that Europa's ocean must be chloride-rich and very similar to our planet's oceans.

Read More About It: http://www.caltech.edu/content/window-europas-ocean-lies-right-surface