NASA officially announced on September 20, 2013, that the historic Deep Impact (DI) cometary mission has been lost after 4.7 BILLION miles and almost 9 years in space and a slew of spaceflight firsts http://www.nasa.gov/mission_pages/deepimpact/media/deepimpact20130920.html#.Uj4KahYbQlI

In June 2005 I co-authored a feature article for Sky and Telescope magazine on Deep Impact with my colleague Elizabeth Warner, University of Maryland. DI was an ambitious mission attempting to do what had never been done before - rendezvous with a comet and launch a second impactor spacecraft to intercept and hit the comet. Oh, by the way, the impactor was totally computer controlled to compute and complete the intercept which it did in spectacular fashion on July 4, 2005. What a mission spectacular that was! 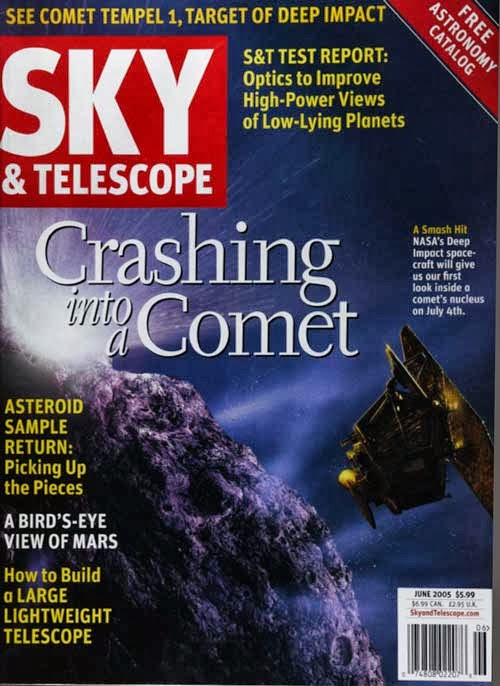 DI was fully functional and had plenty of fuel so the spacecraft was sent to flyby another comet and was used to carry out observations of stars and exoplanets. DI returned about 500,000 images and a treasure trove of data. DI literally rewrote the book on cometary interiors and composition.

Read More About the Mission Highlights and Results: http://www.nasa.gov/mission_pages/deepimpact/main/index.html#.Uj4MjxYbQlI

DI was scheduled to take pictures of Comet ISON and the community was looking forward to seeing these but that data is lost.

Thank you DI for your service - we will miss you.

Email ThisBlogThis!Share to TwitterShare to FacebookShare to Pinterest
Labels: Deep Impact Is Dead