History will be made with the first ever launch of a lunar mission from NASA’s Wallops Island, Virginia, launch facility scheduled for Friday at 11:27 p.m. The night time launch will be visible over a wide area with potentially millions of people throughout the Northeast states able to see the launch of NASA’s Lunar Atmosphere and Dust Environment Explorer (LADEE) - see my accompanying blog on LADEE.

A visibility map and instructions on how to see the Minotaur V rocket/LADEE spacecraft in the sky are here: http://www.orbital.com/NewsInfo/MissionUpdates/MinotaurV/index.shtml  Be sure to scroll through the graphics to find a state or landmark near you that shows the flight path from that location - very nifty indeed as done by Orbital. 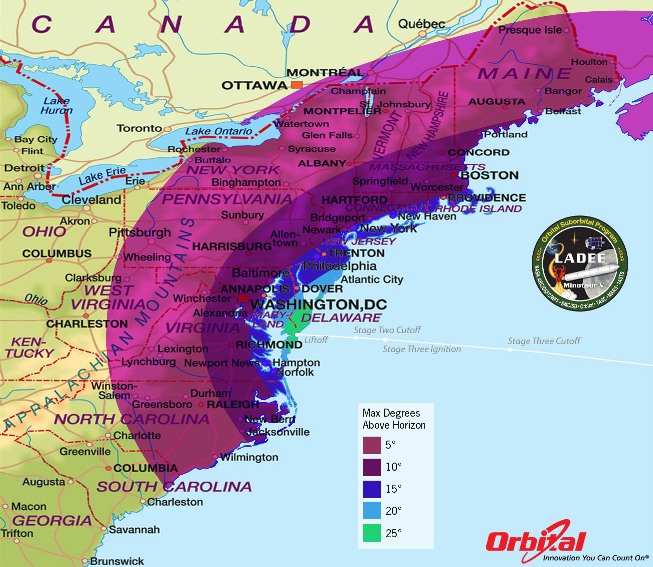 NASA, in partnership with the U.S. Fish and Wildlife Service, Accomack County Board of Supervisors and the Town of Chincoteague, has established two viewing sites for the general public. Visitors to the area may view the launch from Robert Reed Park on Chincoteague or Beach Road spanning the area between Chincoteague and Assateague Islands.

As a bonus, the two sites will feature the LADEE launch countdown live and NASA personnel will be on hand to discuss the LADEE mission. In addition, a live broadcast of the launch operations will be shown on a big-screen projector in Robert Reed Park beginning at 9:30 p.m. on the day of the launch. For more information visit http://www.nasa.gov/content/public-viewing-sites-established-for-nasa-ladee-moon-mission-from-wallops/#.UicIqBYbTFI

Updates on the countdown are available at http://www.nasa.gov/centers/wallops/home/index.html#.UicUyRYbRFI .

I will be at the launch site and hope to get some great pics and video to share with you of the launch.