UPDATED Tune In To Comet ISON on the Internet

Comet ISON is plunging towards the Sun at ever increasing speed. Closest approach is about 3 hours away. Latest movie showing the comet: http://spaceweather.com/images2013/28nov13/sundiver_anim.gif?PHPSESSID=4ertoqlpu5celagmbavfs17lj4

Be sure to tune in to the events below to watch astronomical history as it happens. 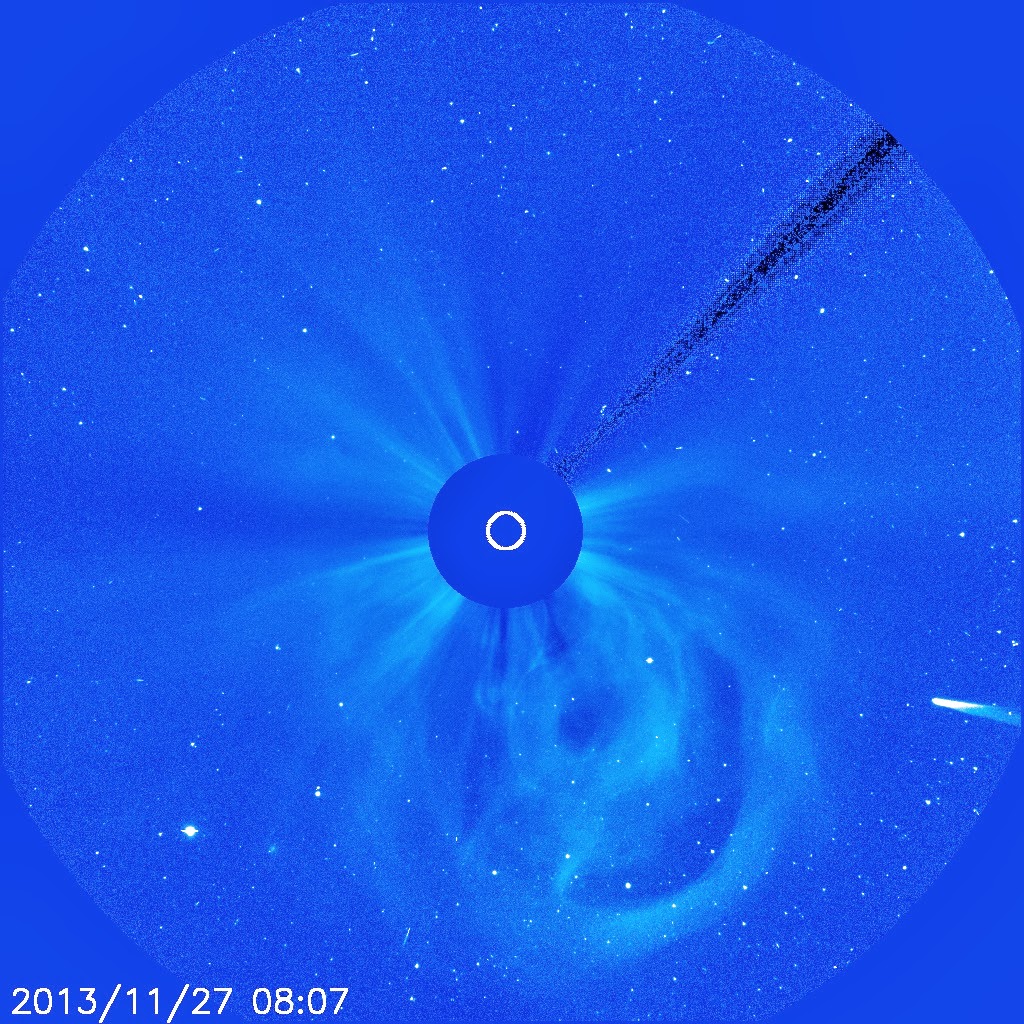 Comet ISON is racing towards the Sun for a Thanksgiving Day rendezvous that will be at its closest point - 730,000 miles - at approximately 1:37 p.m. EST. What becomes of the comet will not be known until something actually happens.

Comet ISON has been quite an enigma since it was discovered last year and the buzz of the astronomical community. With a fleet of solar spacecraft watching the comet as it approaches and passes the Sun, coupled with the power of the Internet, earthlings will have a ringside seat.

NASA will host a Google+ Hangout on the Internet from 1:00 p.m. to 3:30 p.m. EST featuring astronomers and views of Comet ISON in almost live time. NASA television and the agency’s website will also be carrying this event. You can tune in here https://plus.google.com/events/c8t7i5dbr1k50oq89giloiqe8rc.

NASA has established a “Comet ISON” website where you can see the latest information and photos/videos
http://www.nasa.gov/mission_pages/asteroids/comet_ison/index.html

NASA has also put up an Internet site that will showcase the close encounter images from the Solar Dynamics Observatory (SDO) http://cometison.gsfc.nasa.gov

For more technical information on the comet you can get excellent updates here http://www.isoncampaign.org

If the comet survives its close encounter with the Sun the big question then becomes “will it be visible to the viewing public?” Once again, we will not know the answer until the comet has passed the Sun.

If it looks like Comet ISON will be visible I will post some links and finder charts so our readers and listeners can try to see it in the morning sky before dawn.

Stay tuned and tune in on Thanksgiving Day!

Email ThisBlogThis!Share to TwitterShare to FacebookShare to Pinterest
Labels: UPDATED Tune In To Comet ISON on the Internet