China's space/moon program at its roots is being conducted for the very same reason the U.S. and former U.S.S.R did theirs - national prestige. The Chinese government has joined the very exclusive lunar landing club - only the third nation to do so and the first in the last 37-years. 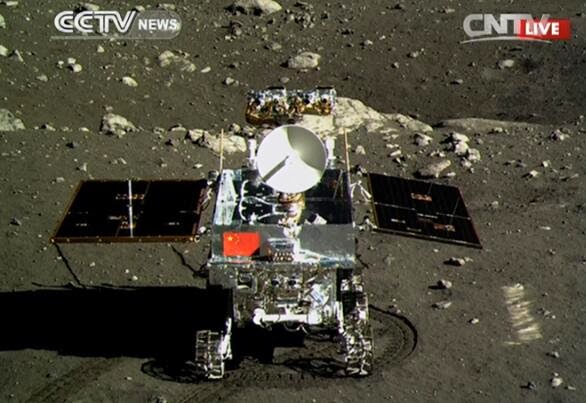 I was very glad to see that China carried out Chang'e 3/Jutu in a live feed media environment. Their previous Chang'e missions were difficult to follow as there was not a robust media effort supporting them as there is with Chang'e 3.

Hopefully China will share the science results of Jutu with the world. One Chinese official interviewed by Chinese media claimed that to be a global power you have to add to global science.  Jutu's color photographs and science results from a previously unexplored lunar surface region would certainly do that.

I look forward to seeing the photos and science results from Jutu. The dust kicked up by the Chang'e 3 lander and the resulting changes in the lunar surface should be detected by NASA's Lunar Atmosphere and Dust Environment Explorer (LADEE) and Lunar Reconnaissance Orbiter (LRO) missions - that too will be science results.

Far more difficult to solve than the technological challenges in getting to the Moon are the global political ones. There was reportedly no cooperation between the U.S. and China during this endeavor. The news is rife with tensions between the two nations with no respite in sight. Further escalation of these tensions, rather than their subsiding, is expected.

So goes the way of our world.

While the six astronauts from 3 nations aboard the International Space Station see a world with no boundaries humanity remains locked in economic and political realities that ultimately cannot succeed for the good of all of humanity.

Our planet has a finite limit on the amount of life it can successfully support and the amount of natural resources available. It cannot be looked upon as an oasis with unlimited growth potential - I think we are already seeing signs of planetary distress in climate change, fresh water availability and global food supply.

Human and robotic expansion into space with the goal of colonizing the Moon and Mars and obtaining water and mineral resources from asteroids and comets is necessary for humanity's long term survival.

Jutu's successful landing and China's upcoming efforts to land Taikonauts on the Moon will become part of humanity's space legacy. Only time will tell how we do as a species.

Email ThisBlogThis!Share to TwitterShare to FacebookShare to Pinterest
Labels: Thoughts on Yutu