Updated: Correction - peak is on the 3rd, not the 2nd. Sorry for the confusion.

Although the DMV will be clouded out tonight and perhaps part of tomorrow morning, NASA will be carrying a Livestream of the Quadrantids meteor shower starting at 6 p.m. EST on 1-2-14. You can also try to tune in on radar to listen to the shower during the peak which is predicted for 3 p.m. EST on 1-3-14.

For my worldwide followers who may be able to see the first main meteor shower of 2014 tonight and tomorrow morning, here are some details to help you.


QuadrantidsActive from January 1st to 10th 2014

The Quadrantids have the potential to be the strongest shower of the year but usually fall short due to the short length of maximum activity (6 hours) and the poor weather experienced during early January. The average hourly rates one can expect under dark skies is 25. These meteors usually lack persistent trains but often produce bright fireballs. Due to the high northerly declination (celestial latitude) these meteors are not well seen from the southern hemisphere.
Radiant: 15:18 +49.5° - ZHR: - Velocity: 26 miles/sec (medium - 42.2km/sec) - Parent Object: 2003 EH (Asteroid)


Read More About It Here . 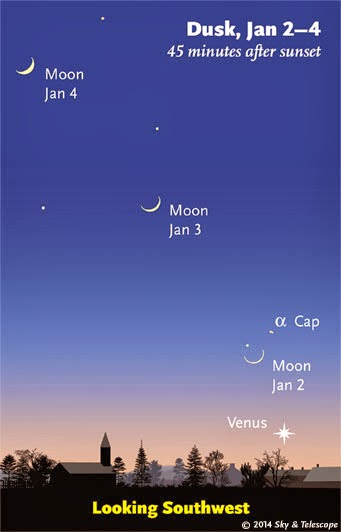