Now is the time to see all of the bright planets. Mercury and Jupiter are visible in the west and east respectively after sunset while Mars, Saturn and Venus adorn the sky in the hours before dawn.


Be sure to look on 1/31/14 in the west as the beautiful young crescent Moon will be to the right of Mercury and will make a good photo op.

Jupiter is up in the east right after sunset and is the brightest object in the sky besides the Moon so you can't miss the King of the Planets. A pair of binoculars will show you the four main moons of Jupiter although there may be fewer when you look as they can pass in front of and behind the planet, You can photograph the moons with a 200mm lens as I did below (enlarged view). 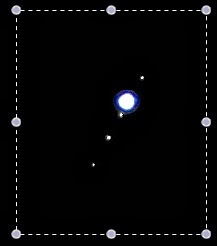 Mars is headed towards closest approach to Earth in mid-April and is getting brighter every week. It rises in the southeast around 11 p.m. and is near a bluish-white star, Spica. Mars is orangish so it sticks out in the sky. Mars is always fascinating to watch as it gets brighter in the sky and earns its name as "God of War" as the planet looks fiery in the sky.

Saturn rises about 1 a.m. in the southeast and is to the upper right of organism Antares.

Beautiful Venus returns to the morning sky being visible about an hour or so before dawn. Seeing Venus today as we prepare for another brutal Arctic Air BLAST put a smile on my face. It is in crescent phase which is visible in binoculars and a telescope. The Moon will join Venus in the eastern sky on 1/29/14 for a splendid photo op.

Believe me, I know it is cold in a large swath of the Northern Hemisphere. But bundle up and get outside for some fresh air and a view of the planets that we have not had in awhile. You'll be glad you did.

Sky Guy in The Arctic Circle of VA
Posted by Sky Guy in VA at 9:05 AM

Email ThisBlogThis!Share to TwitterShare to FacebookShare to Pinterest
Labels: Sky Guy Viewing ALERT - 1/27 to 2/4 2014 See All The Bright Planets