I was launched into the Twitterverse (@SkyGuyInVA) last night during the Oscars and saw1st hand the power of Social Media.

The Oscar show last night was not the best for many reasons BUT Twitter was something to see. The two main threads were the star studded selfie taken at the Oscars that was reported to have beaten President Obama's all time Twitter Tweet and Tweets about 'Gravity'.

'Gravity' nabbed 7 Oscars which is an all time high for a space themed (or any) scifi movie. 1969's '2001: A Space Odyssey' was the last true ground breaker in space related story telling and Gravity was a worthy heir.

In a move of pure social media genius NASA shared with the Twitterverse "#RealGravity" Tweets that showed Low Earth Orbit (LEO) as it really is. The images were remarkable and beautiful beyond description - you felt them as you viewed them.

Each time Gravity won an Oscar NASA would release another Tweet. Astronauts on the International Space Station (ISS) as well as on the ground Tweeted congratulatory messages to Gravity.

When the star studded selfie from the Oscars went out I wanted to send out what I consider to be the best selfie EVER as it was taken over the world: 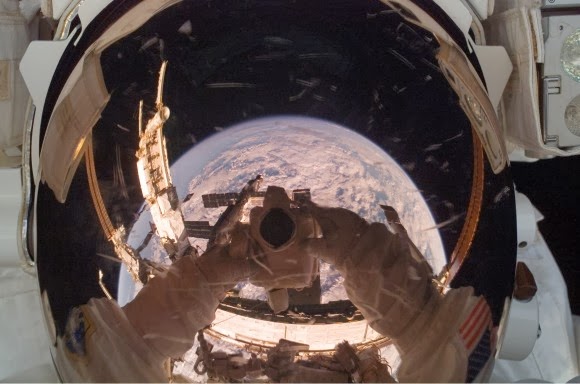 Astronaut Clay Anderson took the selfie and you could say that the Earth Photobombed (appeared in) his selfie. The response from Twitterverse was gratifying last night but upon sending it out to today (3-3-14) in response to a HuffPost Tweet about the Oscar selfie it really took off with dozens of Tweeters responding by "favoriting" and "retweeting" the image.

Once again this shows me that many people on this planet are space oriented and care about humans in space. 'The movie 'Gravity' brought that out as people could see, experience and identify with space and humans in it through the images of LEO and the superb performances by Sandra Bullock and George Clooney.

NASA using the Twitterverse took people to the real deal or #RealGravity of humans in LEO in a way that only someone who has been there can do. Astronauts Tweeting from space in real time was surreal as were the images.

In 6 months NASA takes a giant leap forward with the launch of an unmanned test Orion spacecraft atop a Delta IV heavy for the Exploration Flight Test-1 mission. Orion will go out to 3.600 miles, a distance designed to test the re-entry capabilities of Orion, orbit Earth twice and re-enter at over 20,000 miles per hour, a speed not seen since Apollo astronauts returning from the Moon.

NASA is building the Space Launch System (SLS) which when combined with Orion can send astronauts to LEO, the Moon, Mars and asteroids. There are a lot of critics that say private industry can do it better than NASA, that we don't need to send humans out in space - let robots do it - that NASA is a dinosaur and is broken.

To all of them I say NASA is the only organization that currently exists that can stave off the extinction of humanity due to a space-related calamity and propel us into a space-based future. NASA is funding private sector space and developing new technology through R&D. ISS is learning about the effect of space on the human body. NASA has sent probes to very planet and is enroute to Pluto. It is not perfect by any means but nothing involving humans is.

I hope you see Gravity or view it again. It is not perfect in its science but it is perfect in its imagery and portrayals. Be sure to look at the real deal NASA LEO images afterwards and make it a point to wave at ISS when it flies over you.

Email ThisBlogThis!Share to TwitterShare to FacebookShare to Pinterest
Labels: 'Gravity' & the Twitterverse, NASA