NASA just announced a new addition to the Sun''s neighborhood:

"NASA's Wide-field Infrared Survey Explorer (WISE) and Spitzer Space Telescope have discovered a dim, star-like body that surprisingly is as frosty as Earth's North Pole. This "brown dwarf" is only 7.2 light years away, making it one of the sun's nearest neighbors."

As you can see in the diagram WISE 0855-0714 joins other known systems and is the fourth-closest to our Sun at 7.2 light years. 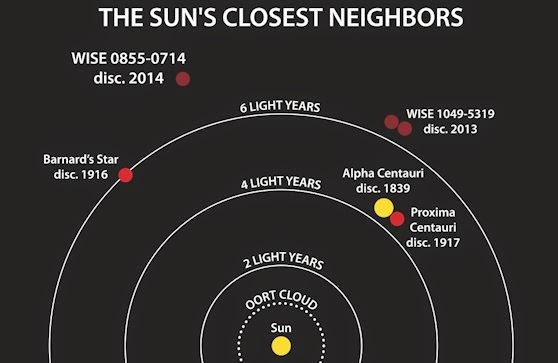 Because it is a brown dwarf, this newest addition is a failed star. That is it lacks the necessary mass to sustain nuclear fusion as stars do. In fact this brown dwarf is a rather chilly place ranging in a temperature  of -54 to 9 degrees F. Weighing in at 3 to 10 times the mass of Jupiter astronomers think it is one of the lowest mass brown dwarfs known.

I have little doubt that more surprises and discoveries await us in our neighborhood, especially when James Webb Space Telescope is launched in 2018.