Here's NASA''s next mission to the Red Planet as described by NASA:

NASA’s Interior Exploration Using Seismic Investigations, Geodesy and Heat Transport (InSight) mission will pierce beneath the Martian surface to study its interior. The mission will investigate how Earth-like planets formed and developed their layered inner structure of core, mantle and crust, and will collect information about those interior zones using instruments never before used on Mars.InSight will launch from Vandenberg Air Force Base, on the central California coast near Lompoc, in March 2016. This will be the first interplanetary mission ever to launch from California. The mission will help inform the agency’s goal of sending a human mission to Mars in the 2030s.

And here is an artist's conception of the newest lander on Mars as provided by NASA: 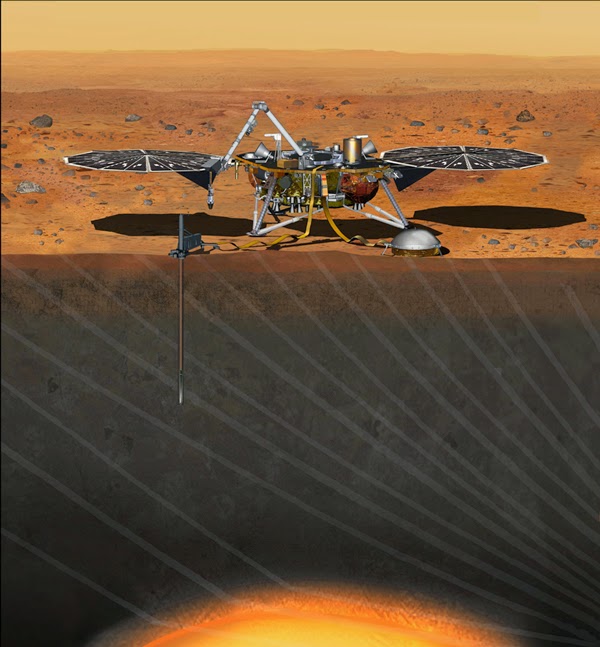 InSight uses  design features from the successful 2008 Phoenix lander which discovered ice and water in the Martian soil. But InSight has a far longer mission length - an additional 630 days for a total of 720 days or almost two years.

This will require additional design features for the lander to survive that long on Mars although it is scheduled to land near the equator versus a high northern latitude landing site as Phoenix had.

You can read more about this exciting mission here.

Email ThisBlogThis!Share to TwitterShare to FacebookShare to Pinterest
Labels: NASA Starts Building the Next Mars Spacecraft