Mark the date for some solar system history - the closest known approach of a comet to a planet. A distinction that has to be made however for this record involves Comet Shoemaker/Levy 9 which IMPACTED Jupiter in 1994 following its death dive into Jupiter's cloud tops.  Comets have also passed very close to the Sun and have impacted our star. 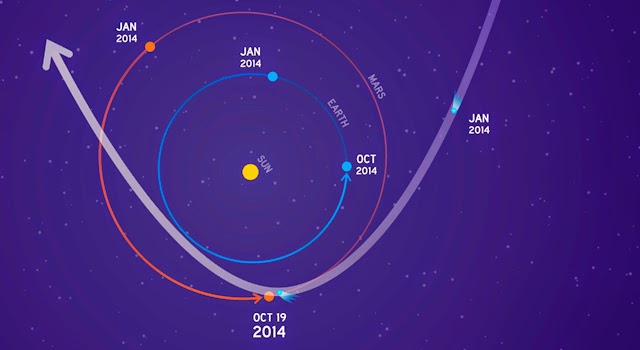 Comet Siding Spring will pass a mere 82,000 miles above the surface of Mars and it should be quite a show to see.

NASA has three orbiting spacecraft and two rovers on the surface and wants to protect these priceless assets from the affects of particles from the comet traveling at a blazing 35 miles per second. A mere speck of cometary dust at that speed spells BOOM & DOOM for anything it hits in space.

To avoid this cometary onslaught  NASA has taken steps to protect Mars Reconnaissance Orbiter, Mars Odyssey and soon to arrive MAVEN by adjusting their orbits. The tricky part to all of this is that at the same time NASA wants to protect its orbiters it also wants to be able to use them to make scientific observations of this very rare opportunity.

The two rovers, Opportunity and Curiosity should be OK due to the Martian atmosphere. They will certainly have a ring side seat and so will we as an array of telescopes and spacecraft provide us images and data.