For those of you in the Northern Hemisphere that are enjoying the Fall season, here is a really cool pic of the Earth taken by NASA: 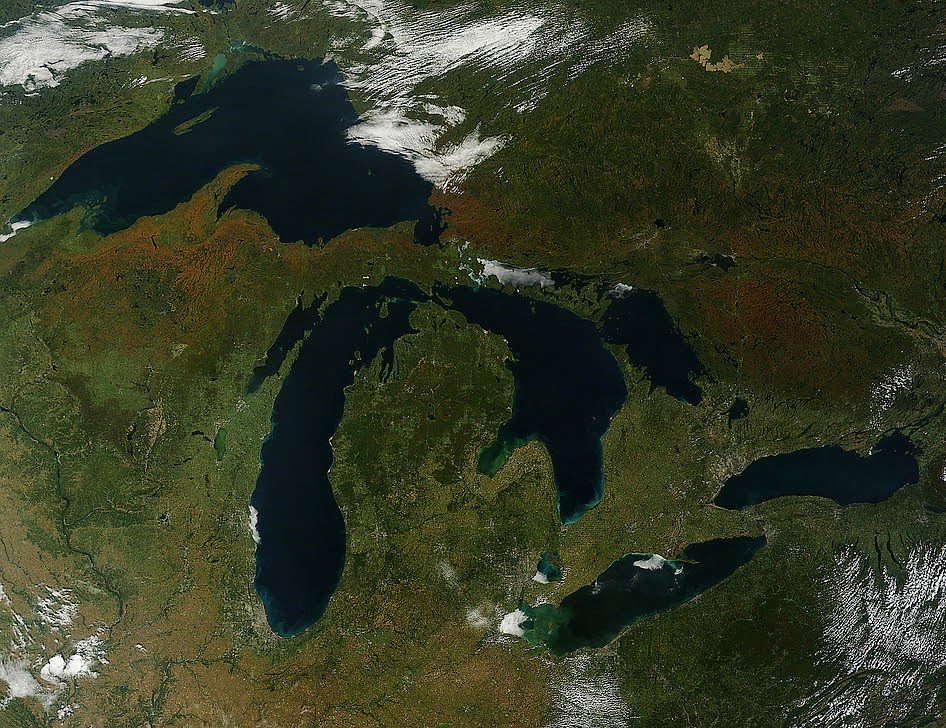 Here is the accompanying caption by NASA that explains how we get these wonderful colors this time of year:

A few days after autumn showed up on the calendar in the Northern Hemisphere, it showed up on the landscape of North America. The Moderate Resolution Imaging Spectroradiometer (MODIS) on NASA’s Terra satellite captured this view of fall colors around the Great Lakes on Sept. 26, 2014. The changing of leaf color in temperate forests involves several causes and reactions, but the dominant factors are sunlight and heat. Since temperatures tend to drop sooner and sunlight fades faster at higher latitudes, the progression of fall color changes tends to move from north to south across North America from mid-September through mid-November. In late summer and autumn, tree and plant leaves produce less chlorophyll, the green pigment that harvests sunlight for plants to convert water and carbon dioxide into sugars. The subsidence of chlorophyll allows other chemical compounds in the leaves—particularly carotenoids and flavonoids—to emerge from the green shadow of summer. These compounds do not decay as fast as chlorophyll, so they shine through in yellows, oranges, and reds as the green fades. Another set of chemicals, anthocyanins, are associated with the storage of sugars and give the leaves of some species deep purple and red hues. > More information Image Credit: Jeff Schmaltz at NASA GSFC. Caption by Mike Carlowicz

Sky Guy in Soon To Be Fall-colorful VA
Posted by Sky Guy in VA at 1:28 PM

Email ThisBlogThis!Share to TwitterShare to FacebookShare to Pinterest
Labels: Fall Colors From Space