The waning crescent Moon and bright Jupiter will be visible near one another for the next few days - 9-19 to 9-20 - in the east before dawn.

The two will form a pretty pair easily visible to city and suburban dwellers alike. The motion of the Moon relative to Jupiter will be obvious over the two days and Earthshine should be present on the Moon. Earthshine is the dark portion of the Moon that is visible due to the reflection of sunlight off of our planet's clouds and oceans. This phenomena was explained by none other than Leonardo da Vinci.

If viewers have binoculars they can see the four main moons of Jupiter as small "stars" just as Galileo did when he discovered them with his crude telescope. Binoculars will also enhance the view of the Moon and Earthshine. 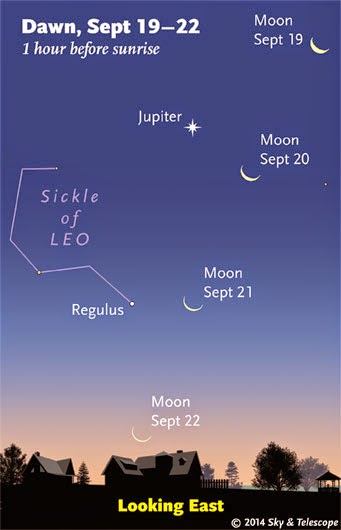 Let's hope it is clear!