From NASA a truly INCREDIBLE pic: 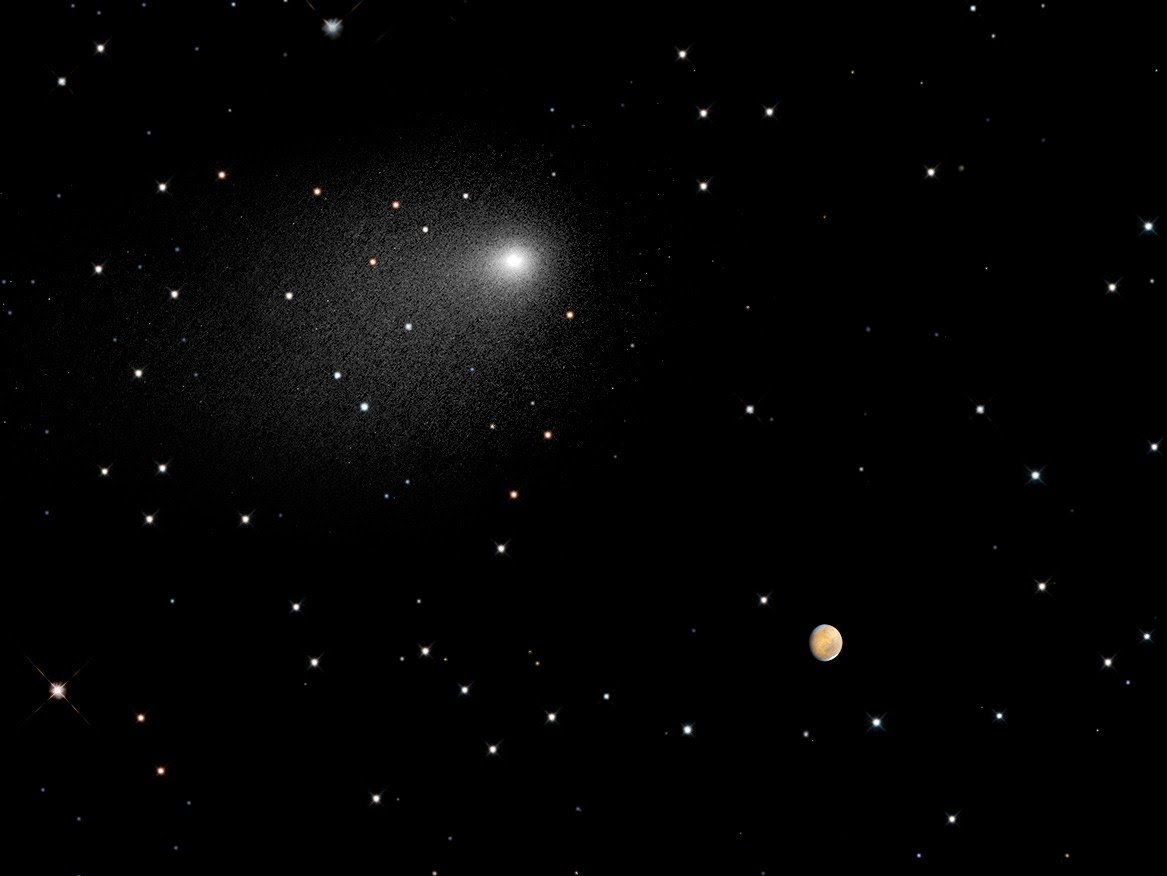 CLOSE ENCOUNTERS: COMET SIDING SPRING SEEN NEXT TO MARSThis composite NASA Hubble Space Telescope Image captures the positions of comet Siding Spring and Mars in a never-before-seen close passage of a comet by the Red Planet, which happened at 2:28 p.m. EDT October 19, 2014. The comet passed by Mars at approximately 87,000 miles (about one-third of the distance between Earth and the Moon). At that time, the comet and Mars were approximately 149 million miles from Earth.The comet image shown here is a composite of Hubble exposures taken between Oct. 18, 8:06 a.m. EDT to Oct. 19, 11:17 p.m. EDT. Hubble took a separate photograph of Mars at 10:37 p.m. EDT on Oct. 18.The Mars and comet images have been added together to create a single picture to illustrate the angular separation, or distance, between the comet and Mars at closest approach. The separation is approximately 1.5 arc minutes, or one-twentieth of the angular diameter of the full Moon. The background star field in this composite image is synthesized from ground-based telescope data provided by the Palomar Digital Sky Survey, which has been reprocessed to approximate Hubble’s resolution. The solid icy comet nucleus is too small to be resolved in the Hubble picture. The comet’s bright coma, a diffuse cloud of dust enshrouding the nucleus, and a dusty tail, are clearly visible.This is a composite image because a single exposure of the stellar background, comet Siding Spring, and Mars would be problematic. Mars is actually 10,000 times brighter than the comet, and so could not be properly exposed to show detail in the Red Planet. The comet and Mars were also moving with respect to each other and so could not be imaged simultaneously in one exposure without one of the objects being motion blurred. Hubble had to be programmed to track on the comet and Mars separately in two different observations.
The images were taken with Hubble’s Wide Field Camera 3.

Touring tomorrow before Sea Dream I arrives on Saturday.