On Dec. 13, Bill Cooke, head of NASA's Meteoroid Environment Office and a team of astronomers from Marshall Space Flight Center will host an overnight NASA web chat from 10 p.m. to 2 a.m. CST, answering questions about the Geminid meteor shower.  To join the webchat on Dec. 13, log into the chat page at:http://www.nasa.gov/connect/chat/geminids_2014.html


This weekend, especially on Saturday and Sunday nights, we will enjoy the peak time for what I think is the best meteor shower of the year, the Geminids. I say best because it reliably produces a large number of meteors per hour (100-120) and many of them are bright. Plus the Geminids is the only major meteor shower where you can see a good number of meteors during the early evening hours instead of the hours just before dawn.

The predicted peak of the 2014 Geminid Meteor Shower are the nights of December 13 and 14 but you can see Geminids from the 12th to the 16th. Each year at this time our planet encounters a debris stream of rock particles made by Asteroid 3200 Phaethon. The Geminids is the only meteor shower caused by an asteroid or what astronomers call a rock comet - all others are due to cometary debris.

As Earth moves in its orbit around the Sun it collides with this rocky debris stream and the particles hit our atmosphere at 22 miles per second (79,000 miles per hour) to become “shooting or falling stars”. It is thought that the Geminds are brighter than other meteor showers because they involve larger and heavier debris than normal cometary dust and penetrate deeper into the atmosphere.

The best place to see the Geminids is a location that is away from lights and obstructions such as trees and buildings. If you are a city dweller you still may see the brightest Geminids as long as you are not staring into a street light or nestled in amongst tall buildings. The view of the Geminids is worth it from the suburbs as long as lights and obstructions are minimized as best you can. Out in the country or along the beach is the best place to be.

You do not need any equipment or know how to enjoy the show - just find a place where you can put a lounge chair or blanket to see the sky. Starting at 9 p.m. look in the east for the constellation Gemini for which this meteor shower is named. Brilliant Jupiter is just below the constellation making it really easy to find and both will rise higher as the night progresses. A meteor that is part of the shower can be traced back to Gemini. Sporadic meteors that are not part of the shower can be seen during the night as well.

The shower will continue all night and be best an hour before dawn - about 4 a.m. The Last Quarter Moon will obscure the dimmer meteors but there should be a bright shooting star every couple of minutes from a dark sky site. The key to watching the shower is being comfortable, in other words WARM. The Geminids can appear anywhere in the sky but looking straight up gives you the widest viewing area - this is where the lounge chair or blanket come in handy.

Enjoy the shower with family, friends or your significant other. Some music, food and beverages are an added plus.

The weather may cloud us out in the WTOP viewing area for the Geminid Meteor Shower. Our best bet is to check the sky to see if it is clear when you want to go out to look for Geminids.

If it is cloudy you can still observe the Geminid Meteor Shower by a very novel and cool means.

As I write this I am listening to meteor radar - yes radar that scans for incoming meteors as well as satellites and space debris. It is a fascinating way - just heard one!! - to monitor a meteor shower like the Geminids. Essentially the louder a ping is, the brighter the meteor would be in the sky.

You can listen during the day and night.

Good hunting, clear skies or not! 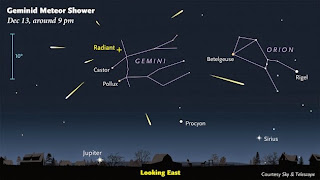 Email ThisBlogThis!Share to TwitterShare to FacebookShare to Pinterest
Labels: Geminids 2014