Lots going on today but the total solar eclipse is worth watching: 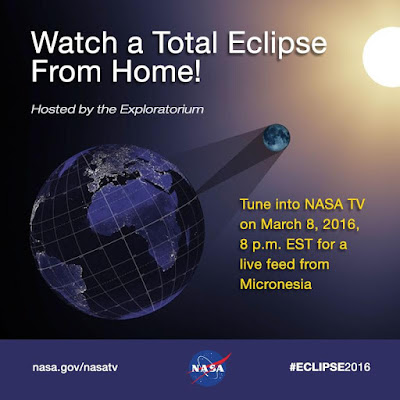 Here's the rest of the story about Super Sky Tuesday.


Had your fill of politics for awhile? Not to worry as this Tuesday we have a trio of super sky events to take your mind off of the continuing election year.

To update my previous story   http://wtop.com/the-space-place-tech/2016/02/the-space-place-meteorites-twitter-hype-and-more/    on the close approach of asteroid 2013 TX68 to our planet. Flyby was expected today http://www.jpl.nasa.gov/news/news.php?feature=4888 anywhere from 15,000 miles to 3 million miles. This wide range is due to lack of sufficient observations to precisely define the space rock’s orbit but a clear miss was assured.

Although the space rock safely passed us by the Internet is still abuzz with end of the world chatter http://www.mirror.co.uk/news/technology-science/science/world-going-end-tomorrow-asteroid-7510201 If 2013 TX68 had entered the Earth’s atmosphere it would have released about twice the energy of the 2013 Chelyabinsk bolide http://wtop.com/news/2014/02/chelyabinsk-one-year-later/

There is a total solar eclipse for areas of the Pacific and Indonesia taking place on March 9 in their time zones but occurs today in ours. We can’t see the eclipse here in the DMV but we can watch it live (and safely) on the Internet  http://www.nasa.gov/press-release/nasa-to-provide-live-coverage-interviews-and-social-media-for-march-8-solar-eclipse via NASA’s telecast tonight starting at 8 p.m. EDT.

If you happen to be reading this in an area that the eclipse is occurring, make sure you view the eclipse SAFELY by following these eye safety guidelines http://www.nasa.gov/content/eye-safety-during-a-total-solar-eclipse Failure to do so can result in injury to your eyes.

Be sure to tune in at 1 p.m. for a Reddit Ask Me Anything session as solar scientists from NASA's Goddard Space Flight Center in Greenbelt, Maryland, will be taking questions on the eclipse and the science observations that NASA will be conducting  http://www.nasa.gov/feature/goddard/2016/a-moment-in-the-suns-atmosphere

The next total solar eclipse will be August 21, 2017 and will occur in the United States http://eclipse.gsfc.nasa.gov/SEgoogle/SEgoogle2001/SE2017Aug21Tgoogle.html. I will have much more on this as we get closer to the event.

If you have been outside at night when clear lately, you may have noticed a very bright “star” in the East. That “star” happens to be the planet Jupiter and it will be rising at sunset today as it is at opposition, or directly opposite the Sun. King of the planets, mighty Jupiter will be in our sky all night in the coming months and will be the brightest object in the night sky after the Moon.

A pair of binoculars can show the four main moons of Jupiter discovered by Galileo in 1610  http://solarsystem.nasa.gov/planets/jupiter/moons   and any quality telescope will reveal details in the atmosphere of the gas giant planet. You can determine which moon is which by using this nifty tool http://www.skyandtelescope.com/wp-content/observing-tools/jupiter_moons/jupiter.html. It is pretty cool to watch the moons change their positions as the night goes on.