I got the 'scope out last night and looked at the Moon and Jupiter. I took this pic as it shows the 4 main moons of Jupiter. From L-R: Io, Europa, Callisto, Ganymede. 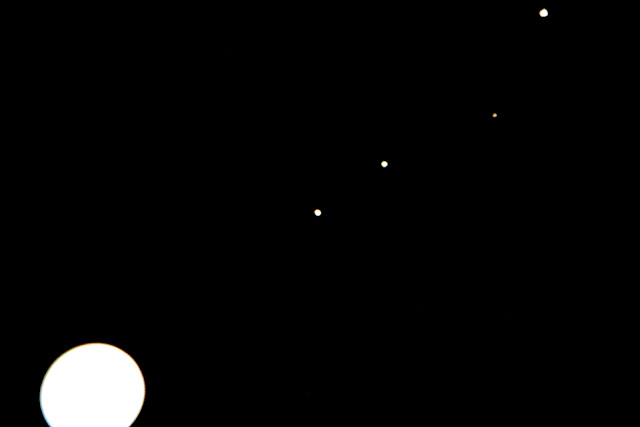 I swear I can see some color on Callisto which would be a first for me. The atmosphere was pretty steady last night so maybe those really are true surface disks I captured. I know the focus was spot on but the atmosphere is always dancing around.

Jupiter is overexposed in the lower left so that the moons could be photographed.

You can see these four main moons just like Galileo did in 1610 using a good pair of binoculars or any size telescope. There will be times when all four are not there as they are passing in front of or behind Jupiter. In a good telescope you can see these transits (in front of) and occultations (passing behind) in your 'scope as the involved moon disappearing and casting its shadow onto Jupiter's cloud tops.....so cool to see in real time.

Jupiter remains prominent and well placed so take a peek for yourself.

I wanted to see Saturn and Mars this morning but clouds and smoke prevented me from doing so....going to try again tonight.

Sky Guy in Smoky VA From A Forest Fire In Shenandoah National Park
Posted by Sky Guy in VA at 6:24 PM