Glad to be back after a wonderful 18 day Hawaii cruise aboard Holland America's beautiful Westerdam. I will share with you my trip to Mauna Kea Observatories later but I want you to see this first.

I toured the Hawaii Volcanoes National Park  HVNP on 2/24/17 and it is currently active in its central crater. It was amazing to see venting come out of the crater AND TO SMELL IT.
When I was up at Mauna Kea you can see the VOG - volcanic smog - in a layer that flows through the valley between Mauna Kea and Mauna Loa.


The real treat was the next night transiting to our next port when we went directly south of HVNP. It looked like Hell on Earth as the Crater came alive in the dark. 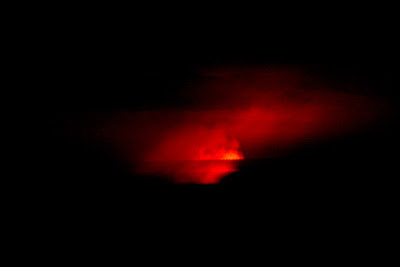 I made a video of the lava flow that descends from the crater to the sea and posted it on You Tube. The awesome power of seeing new land being created right before your very eyes in such explosive fashion was breathtaking.

I have seen the effects of lava on Earth and in the solar system but this was my 1st ever encounter with LIVE and active lava. It was simply amazing and humbling.

We humans think we are in control of all things - we are not. Earth is. Change the climate or the geology of our planet and you change humanity. We are seeing that in climate change right now and I have seen the affects in my world travels. I have personally witnessed the power of geology in the form of 8.1 and smaller earthquakes to include being in the San Fransisco event of October 1989.

And now, seeing the Dante's Inferno of destruction and creation at work at HVNP through the unrelenting power of lava, I am awed. Our planet and other bodies of the solar system have been built through mighty geologic forces including volcanoes and lava - the Moon, Venus, Mars, Io to name a few. We have even seen CRYOVOLCANOES - "lava" of frozen origin - at work in the outer solar system.

I hope this has given you a better perspective about the planet on which you live. The Earth doesn't need us, we need the Earth. Our planet has another couple billion years of evolution to undergo before the Sun destroys our planet by returning it into the dust from which it came 4.6 billion years ago.

Until then, lava will continue to create and destroy and amaze.