Today is the 60th anniversary of Sputnik - the first spacecraft to orbit the Earth. Launched by the USSR it spawned the space race (and space age) which eventually led to America landing astronauts on the Moon.

The 1st citizen scientist project of the Space Age - Project Moonwatch - was started to monitor the orbit of Sputnik and other satellites to help refine the Earth's shape and orbit.

Now 60 years into the Space Age you can send your name to Mars on NASA's next mission to the Red Planet, InSight. You have until November 1st to sign up, so join me in doing so.

As you can see I am a Frequent Flyer with NASA's missions! 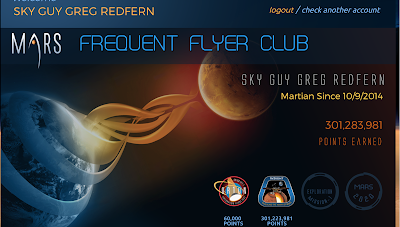