I wanted to share with you my once in a lifetime experience seeing the eclipse underway on cruise ship Azamara Pursuit off the coast of Port Madryn, Argentina in the South Atlantic Ocean. Even though I have seen 5 total lunar eclipses at sea and at least a dozen more on land this was the best ever.

Why? Because in the over half century I have been observing and photographing total lunar eclipses this was the first time EVER that I had experienced the deep southern sky come into stunning viewing during totality. Cloudy weather on 1/31/18 aboard Azamara Journey prevented me seeing such a view off the coast of S. Australia in the Southern Ocean. Not so last night.

During totality our home galaxy, the Milky Way, spanned the ENTIRE SKY from port to starboard passing DIRECTLY overhead! The enchanting Southern Cross with its two bright guardian stars, Alpha and Beta Centaurus greeted us. We also saw the famous Magellanic Clouds, two dwarf galaxies flying through intergalactic space with the Milky Way. They appeared like spectral presences in the dark sky - the same way Ferdinand Magellan saw them in 1509.

Here is my pic from a previous voyage aboard Azamara Quest of what they look like deep down under the equator. 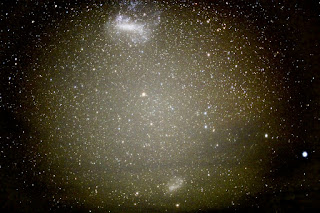 We had LOTS of lightning before the eclipse and the bridge monitored the weather as Azamara Pursuit was headed towards the storm. 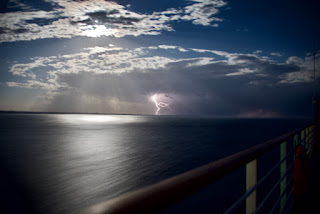 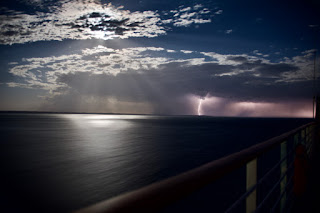 We had several hundred guests on deck for the eclipse and Captain Carl Smith used his green laser pointer - bright like a Star Wars' laser saber (he could take on Darth Vader easily) - to point out navigational stars. As Captain Carl said today in his daily noon public announcement, "It was amazing to have over a hundred guests on deck after midnight when there was no food or drink".

We saw the ghostly penumbral shadow at about 0015 ship's time. 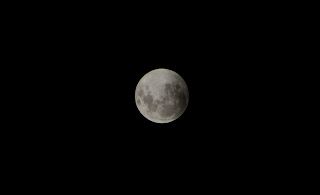 Then right on time the Earth's dark umbra shadow started to cover the Moon, showing that gravity still works in the solar system. 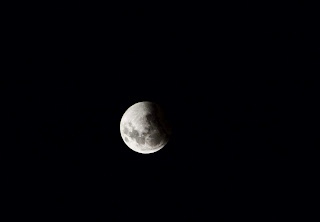 Totality was a full and glorious 62 minutes which allowed the stars to come out in stunning clarity and brightness as you can see in the stars near the Moon and upside down Orion (for those used to seeing the Hunter above the equator). 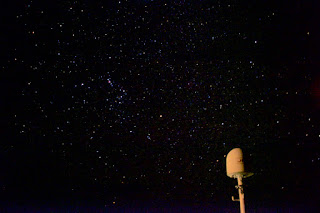 I will never forget the magic of seeing the Milky Way spanning the ENTIRE SKY horizon to horizon in a totally dark environment - less the occasional FLASH PHOTOGRAPH (grrrrrrr). As I commented, "Your flash photos are not strong enough to make it to the laser reflectors left on the Moon by the astronauts so please refrain from taking them". Well, that didn't work - LOL.

Some clouds kept the Moon company during totality off and on but overall it was a PERFECT event. Having been up for over 40 hours and flying 6,000 miles with a 3 hour nap AND having to give a lecture on the Moon at 10 a.m., I hung it up at 3 a.m. after totality ended.

As totality enveloped us and the stars came out in the deep lunar glow and accompanying darkness in an almost primal fashion, I asked the guests to focus on the sound of Azamara Pursuit through the water. The sound of the waves graced our ears to accompany the surreal sky view we were privileged to witness.