If you have been watching the night sky during the past summer or recently you may have noticed two bright "stars" in the southwest sky after sunset. And if you have been watching over time these two "stars" have been moving closer to one another and towards the West. These "stars" are really the planets Jupiter, the brightest of the pair, and Saturn. 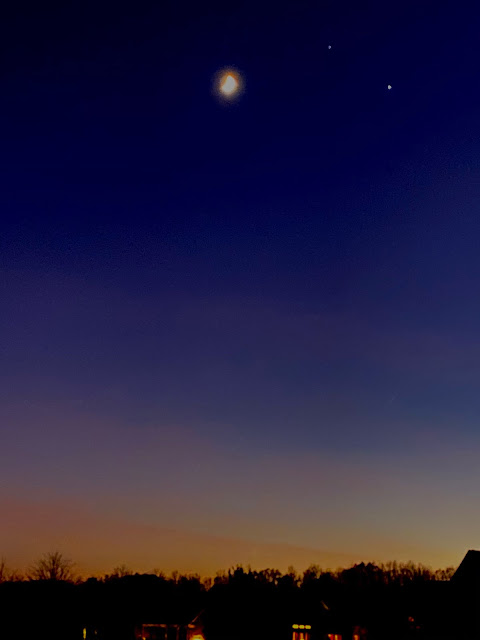 30 days from today, on December 21, 2020, Jupiter and Saturn will be visible after sunset in the West. But the two gas giants of the solar system will appear to the unaided eye as almost one.  They will be historically close at only a tenth of a degree, or 1/5 the Moon's diameter as seen in the sky.

In fact, according to Rice University astronomer, Patrick Hartigan, “You’d have to go all the way back to just before dawn on March 4, 1226, to see a closer alignment between these objects visible in the night sky.”

In case you are wondering, that would be during the Middle Ages!!!

Whenever solar system objects are close to one another in the sky astronomers say they are in conjunction. This event qualifies as a Great Conjunction as it involves Jupiter and Saturn.

Any optical aid will improve your view, especially in a telescope. In a telescope an observer should be able to see both planets easily, including their brightest moons. 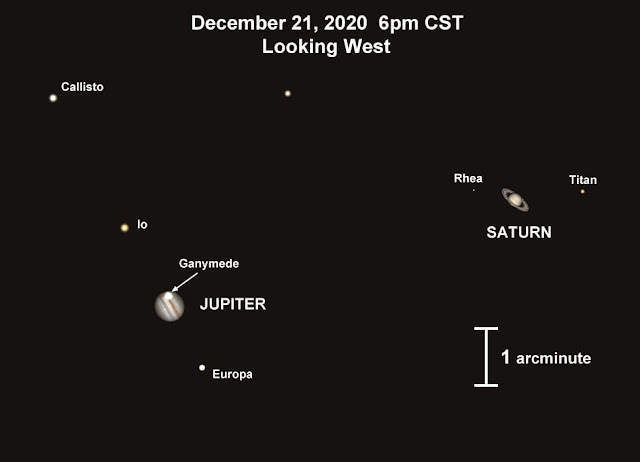 A view showing how the Jupiter-Saturn conjunction will appear in a telescope pointed toward the western horizon at 6 p.m. CST, Dec. 21, 2020. The image is adapted from graphics by open-source planetarium software Stellarium.
(This work, “jupsat1,” is adapted from Stellarium by Patrick Hartigan, used under GPL-2.0, and provided under CC BY 4.0 courtesy of Patrick Hartigan)
Credit: Rice University Press Release

Start watching tonight and each clear night to see this possibly once in a lifetime celestial pairing. I say that because these two planets will not be this close again for 60 years. As described in the Rice University press release, "Those who prefer to wait and see Jupiter and Saturn this close together and higher in the night sky will need to stick around until March 15, 2080, Hartigan said. After that, the pair won’t make such an appearance until sometime after the year 2400.

Any smartphone or camera or camera can image the celestial pair as they are bright and require short exposures. Just point, focus and shoot like I did with my smartphone.

I'll have more on this as we get closer.