Here is a RARE double Sky Guy Viewing Alert on the same day! 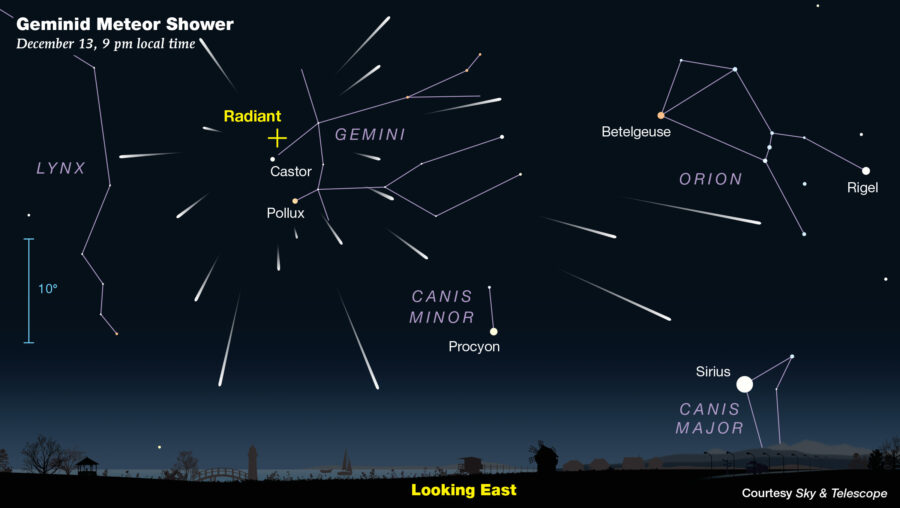 Geminid meteors can flash into view anywhere in the late-night sky. But if you follow their paths back far enough, they all appear to diverge from a point in the constellation Gemini. The meteors' perspective point of origin is called the shower's radiant. Don't expect to see several meteors at once! This diagram is meant only to show their divergence from the radiant point.Sky & Telescope / Gregg Dinderman

Just like this time last year, large parts of the U.S. will likely have cloudy skies on the night of December 13-14, the peak of the Geminids Meteor Shower. But all is not lost as the American Meteor Society (AMS) states, “If your weather appears to be overcast on the peak night, the two nights prior and the one night after the peak will also produce impressive activity.”

AMS also states that, “The prime hours to watch Geminid activity are between 11pm and 4am local standard time.”

Sky and Telescope (S&T) predicts that,“the Geminids should peak around 8 p.m. EST (5 p.m. PST) on December 13th.”  Like AMS, S&T states, “ So should the night of December 13–14 be cloudy, it’s worth casting your gaze skyward the night before and after the peak, when you could pick up around 30 or 15 meteors per hour, respectively.” 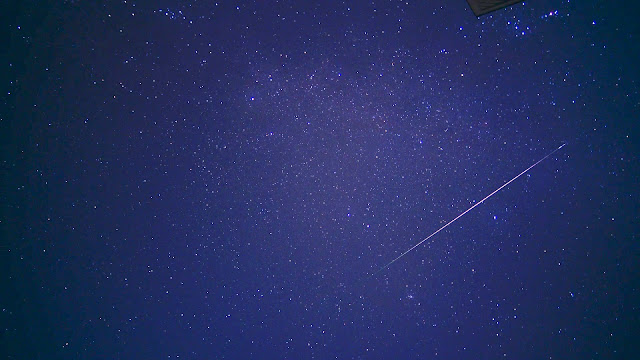 As I write this the current National Weather Service (NWS) forecast has cloud cover in Central Virginia at 49%. Not great BUT it isn’t 100% either!

The best thing to do is monitor the night skies on Friday, Saturday and Monday as it is forecasted to be partly cloudy for some portions of those nights. To get detailed weather forecasts including sky cover percentages for your location check the National Weather Service (NWS). Just provide your zip code, click “Go” and then use the “Tabular Forecast” to get sky cover percentages.

Each year the Geminid Meteor Shower reliably produces a large number of meteors per hour (75-100+) in a dark sky with many of them being bright enough to be classified as fireballs - a meteor that is brighter than the planet Venus. To get an idea how bright this is you can see Venus in the SE sky before dawn. Bottom line - these fireballs are BRIGHT!

Each year at this time our planet encounters a debris stream of rock particles made by Asteroid 3200 Phaethon as it orbits the Sun. The Geminids is the only major meteor shower caused by a rock comet. All other meteor showers, except the Quadrantids (caused by an asteroid), are due to cometary debris. There are about a dozen major meteor showers with a number of minor showers that take place each year.

Our very own Naval Research Laboratory has been able to image the asteroid trail that produces the Geminid Meteor Shower.

As Earth moves in its orbit around the Sun each year it collides with this rocky debris stream and particles hit our atmosphere at about 80,000 miles per hour to become “shooting” or “falling stars”. The Geminds are believed to be brighter than other meteor showers because they involve larger and heavier debris than normal cometary dust and penetrate deeper into the atmosphere.

The best place to see the Geminids is at a location far away from lights and with no obstructions such as trees and buildings. If you are a city dweller you still may see the brightest Geminids as long as you are not staring into a street light or nestled in amongst tall buildings. Out in the country or along the beach or on a cruise ship is the best place to be.

Best of all you do not need any equipment or know how to enjoy this sky show spectacle. You just need to find a place where you can put a lounge chair or sleeping bag to see as much of the sky as possible.

The shower will continue all night before dawn. Your best bet for enjoying the shower is to be comfortable which means staying WARM. The Geminids can appear anywhere in the sky. Share viewing the shower with family, friends or your significant other. Food and hot beverages are an added plus that contributes greatly to comfort and enjoyment.

It’s a week until winter making it cold and maybe cloudy. But it’s still worth trying to see the best producing meteor shower of the year to forget that has been 2020.