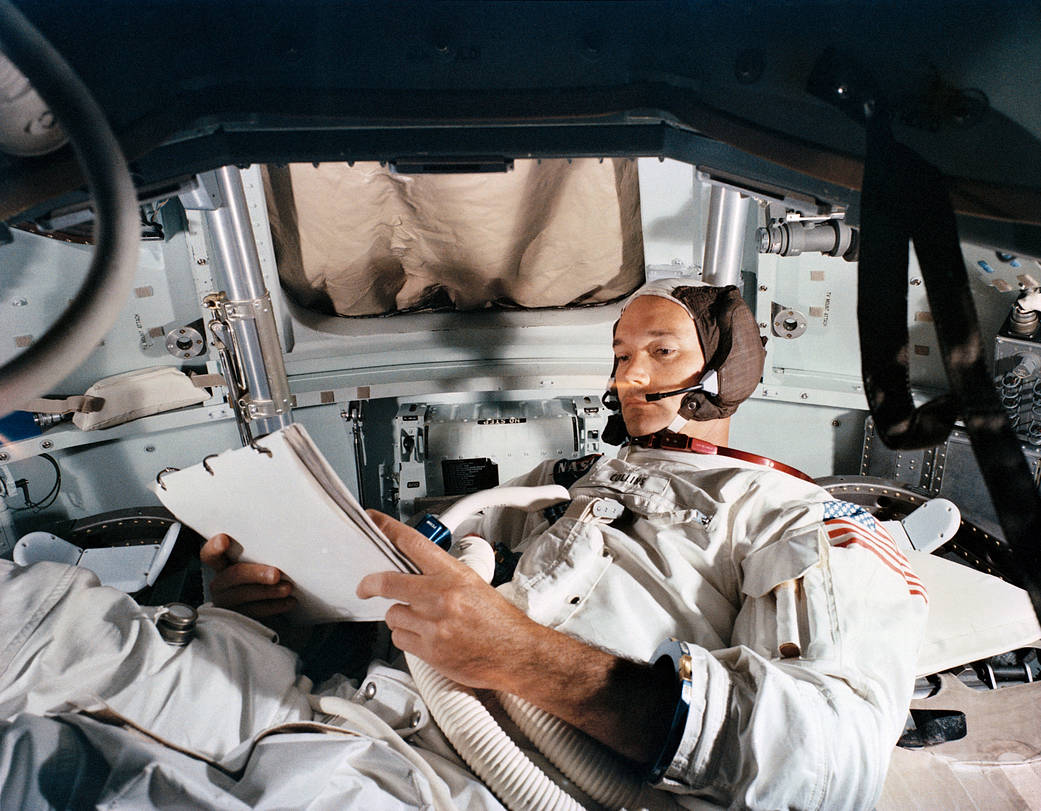 In this image, Command Module (CM) pilot Michael Collins practices in the CM simulator on June 19, 1969, at Kennedy Space Center.

Gemini and Apollo astronaut Michael Collins, our beloved father and grandfather, died on Wednesday, April 28, 2021, after a valiant battle with cancer. He was 90. This day also marked the 64th wedding anniversary between Mike and his late wife, Patricia Finnegan Collins.

Please join us in fondly and joyfully remembering his sharp wit, his quiet sense of purpose and his wise perspective, gained both from looking back at Earth from the vantage of space and gazing across calm waters from the deck of his fishing boat.

As the command module pilot on NASA's Apollo 11 mission, Mike circled the moon while Neil Armstrong and Buzz Aldrin touched down at Tranquility Base on July 20, 1969. When his two crewmates returned from the surface, he was in the unique position to capture a photo of all of humanity — his fellow astronauts on board the lunar module and everyone else on Earth off in the distance.

“Today the nation lost a true pioneer and lifelong advocate for exploration in astronaut Michael Collins,” acting NASA administrator Steve Jurczyk said in a statement. “As pilot of the Apollo 11 command module – some called him ‘the loneliest man in history’ – while his colleagues walked on the moon for the first time, he helped our nation achieve a defining milestone.”

Path to the moon

A member of NASA's third group of astronauts selected in 1963, Mike’s path to joining the first moon landing began with a three-day flight in Earth orbit. Assigned as the pilot aboard Gemini 10, he launched with John Young in July 1966 on a mission that demonstrated rendezvous and docking with two rocket stages.

Mike performed two spacewalks on Gemini 10, becoming only the fourth person to exit a spacecraft to work in the vacuum of space and the first to conduct two on the same mission. On his second extravehicular activity (EVA), he became the first astronaut to transfer to another vehicle, retrieving a cosmic dust collector from the exterior of an earlier launched Agena target stage.

After Gemini 10, Mike was assigned to what was slated to be a test of the complete Apollo spacecraft in Earth orbit (that flight, Apollo 8, later was changed to be the first mission to send humans into orbit around the moon). In the course of his training, though, he developed problems with his legs and ultimately required surgery to correct for a cervical disc herniation. Given the time needed for his recovery, he was removed from the crew and reassigned to Apollo 11.

Though he later pondered if Apollo 8 might someday be seen as the more historic mission ("As you look back 100 years from now, which is more important, the idea that people left their home planet or the idea that people arrived at their nearby satellite?"), Mike was very happy to be part of the Apollo 11 crew — even if he was not one of the moonwalkers.

"It's one of the questions I get asked a million times, 'God, you got so close to the moon and you didn't land. Doesn't that really bug you?' It really does not," he said.

of the three? No. But was I pleased with the one I had? Yes! And I have no feelings of frustration or rancor or whatever. I'm very, very happy about the whole thing."

Having decided before Apollo 11 lifted off that it would be his last mission, Mike splashed down from the moon having accumulated a total of 11 days, 2 hours and 4 minutes in space over the course of his two flights.

Mike was born on Oct. 30, 1930, in Rome, Italy, where his father, a career U.S. Army officer, was stationed. After moves from Oklahoma to New York to Maryland to Ohio to Puerto Rico to Texas to Virginia, he attended St. Albans preparatory school in Washington, D.C. He then received an appointment to the U.S. Military Academy at West Point, New York, where Mike earned his Bachelor of Science in 1952.

Enlisting in the Air Force, Mike was trained on and flew F-86 fighter jets out of Nellis Air Force Base in Nevada and George Air Force Base in California, before being assigned overseas to the Chambley-Bussières Air Base in France and to West Germany during the 1956 Hungarian Revolution. He returned to the U.S. the following year, where he attended an aircraft maintenance officer course and then commanded a mobile training detachment, traveling to air bases around the world.

In 1960, Mike reported to the Air Force Experimental Flight Test Pilot School (later Aerospace Research Pilot School) at Edwards Air Force Base in California. He applied for NASA's second class of astronauts but was not selected.

Instead, in 1962, he took a postgraduate course on the basics of spaceflight, which included flying F-104 supersonic jets to 90,000 feet (27,000 m) and training in weightlessness on parabolic flights. He graduated and returned to fighter operations at Randolph Air Force Base in Texas when he was accepted with the third group of NASA astronauts.

Prior to flying on Gemini 10, Mike's first assignment was to specialize in the development of the program's spacesuits. He then served as backup pilot for the Gemini 7 mission.

Prior to the 1967 Apollo 1 fire, which claimed three astronauts' lives, he was training for the then-planned second crewed flight of the Apollo program. In the wake of the tragedy, the mission was canceled.

Although he did not fly on Apollo 8 due to needing surgery, Mike still played an important role on the 1968 mission, serving as CapCom, or capsule communicator, from inside Mission Control in Houston. It was Mike who informed the crew that they were good to break the bonds of Earth’s gravity and set course for the moon with the words “Apollo 8, you are go for

After Apollo 11 and spending 21 days in quarantine to protect against any possible "moon germs," riding in ticker tape parades in New York and Chicago, attending a state dinner, addressing a joint meeting of Congress and touring 22 countries in 38 days, Mike resigned from NASA in January 1970.

Recruited by the Nixon Administration, Mike accepted a position as Assistant Secretary of State for Public Affairs, but found he did not enjoy the job and left after a year to become the first director of the Smithsonian Institution's National Air and Space Museum.

Mike advocated for its funding and oversaw the museum being built once its budget was approved by Congress. He presided over the museum's opening on July 1, 1976, when his Apollo 11 command module, Columbia, and many of his own personal effects flown on the mission went on public display.

Mike headed the National Air and Space Museum until 1978, when he became undersecretary of the Smithsonian. He completed Harvard Business School's advanced management program in 1974 and took a position as vice president of LTV Aerospace, a NASA contractor, in 1980.

In 1982, Mike retired from the Air Force with the rank of Major General. In 1985, he left LTV to found his own consulting firm.

In addition to "Carrying the Fire," he authored "Flying to the Moon and Other Strange
Places" (Farrar, Straus and Giroux, 1976), "Liftoff! The Story of America's Adventure in
Space" (Grove Press, 1988) and "Mission To Mars: An Astronaut's Vision Of Our Future" (Grove Weidenfeld, 1990).

For his service to the space program, Mike was honored with many awards, including the NASA Exceptional Service Medal, the NASA Distinguished Service Medal and the Legion of Merit. With his Apollo 11 crewmates, he was bestowed the Collier Trophy, the Presidential Medal of Freedom, the Harmon Trophy and the Congressional Gold Medal.

Of all the honors he received, Mike was most proud to be named a Fellow in the Society of Experimental Test Pilots, the prestigious international society founded in 1955 that represents the men and women who advance aerospace vehicles through flight test programs.

Outside of his professional career, Mike enjoyed physical challenges, including running in marathons and competing in triathlons. On his 50th birthday, he ran 50 miles as a personal celebration. In his retirement, he took up watercolor painting and attended art classes to improve his skill. His chosen subjects were the aircraft that he flew and natural surroundings of the Florida Everglades.

Above all else, he relished the time he spent with his family. It was for that reason that chose to leave NASA when he did, possibly missing a chance to walk on the moon in favor of spending more time with his children and grandchildren.

He is survived by his sister, Virginia (Nuchi) Collins Weart and by his two beloved daughters, Kate Collins (and husband Charlie Newell) and Ann Collins Starr (and husband Chris Starr). He had seven grandchildren: Matt Starr, Jake Newell, Jane Starr, Julia Starr, Luke Newell, Katie Starr and Tim Starr. He is also survived by many cherished nieces and nephews.

Mike always faced the challenges of life with grace and humility, and faced cancer, his final challenge, in the same way. We will miss him terribly. Yet we also know how lucky Mike felt to have lived the life he did. We will honor his wish for us to celebrate, not mourn, that life.

Now when we wink at the Moon we will remember Mike and Neil.