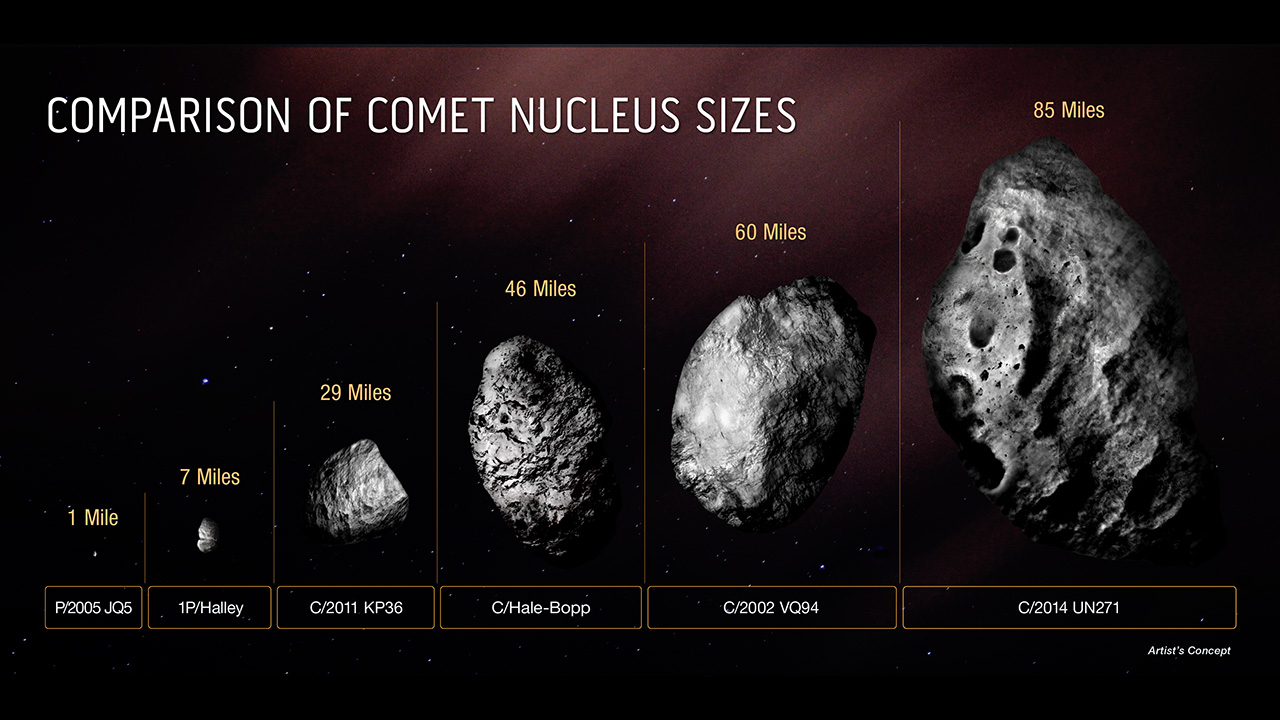 This diagram compares the size of the icy, solid nucleus of comet C/2014 UN271 (Bernardinelli-Bernstein) to several other comets. The majority of comet nuclei observed are smaller than Halley’s comet. They are typically a mile across or less. Comet C/2014 UN271 is currently the record-holder for big comets. And, it may be just the tip of the iceberg. There could be many more monsters out there for astronomers to identify as sky surveys improve in sensitivity. Though astronomers know this comet must be big to be detected so far out to a distance of over 2 billion miles from Earth, only the Hubble Space Telescope has the sharpness and sensitivity to make a definitive estimate of nucleus size.

4-BILLION-YEAR-OLD RELIC FROM THE EARLY SOLAR SYSTEM IS HEADED THIS WAY
Denizens of deep space, comets are among the oldest objects in the solar system. These icy "Lego blocks" are leftover from the early days of planet construction. They were unceremoniously tossed out of the solar system in a gravitational pinball game among the massive outer planets. The kicked-out comets took up residence in the Oort Cloud, a vast reservoir of far-flung comets encircling the solar system out to many billions of miles into deep space.
A typical comet's spectacular multimillion-mile-long tail, which makes it look like a skyrocket, belies the fact that the source at the heart of the fireworks is a solid nucleus of ice mixed with dust — a dirty snowball. Most comet nuclei measure a few miles across and so would fit inside a small town, but Hubble astronomers have uncovered a whopper. Comet C/2014 UN271 (Bernardinelli-Bernstein) could be as big as 85 miles across, over twice the width of the state of Rhode Island.
Comet C/2014 UN271 was discovered by astronomers Pedro Bernardinelli and Gary Bernstein in archival images from the Dark Energy Survey at the Cerro Tololo Inter-American Observatory in Chile. It was first serendipitously observed in 2010. Hubble observations in 2022 were needed to discriminate the solid nucleus from the huge dusty shell enveloping it, with help from radio observations.
The comet is now less than 2 billion miles from the Sun, and in a few million years will loop back
to its nesting ground in the Oort Cloud.
Posted by Sky Guy in VA at 12:22 PM