Asteroids are the left over rocky remnants - and perhaps directly related to comets - that occupy the space between Mars and Jupiter, as well as other areas in the solar system. Asteroids pose a direct and real threat to our existence as an impact from a kilometer sized object would be devastating if it were to occur in a populated area or in the oceans near a population center.

The more we learn about them the better we will be able to defend ourselves against them. There are several world-wide patrol efforts ongoing that are looking for these threats every clear night. We have sent numerous missions to asteroids and have actually landed on them.

But in 2010 there was a Japanese Aerospace Exploration Agency (JAXA) mission that not only landed on an asteroid, but took off to return to Earth with samples in a capsule! JAXA's Hayabusa spacecraft returned microscopic particles of the Itokawa asteroid and scientists have been studying them. The results will be released at a science conference in March 2011.

Read More About It: http://science.nasa.gov/science-news/science-at-nasa/2010/30dec_samplereturn/ 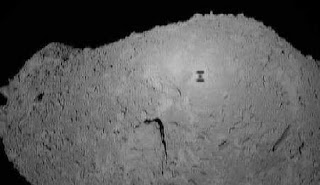 The shadow of ﻿Hayabusa on Itokawa JAXA
Sky Guy In VA﻿
Posted by Sky Guy in VA at 2:35 PM