It was gratifying to see the attention and turnout in Florida, Washington, D.C. and Northern Virginia today for Space Shuttle Discovery. I watched her at Ronald Reagan Airport for 3 flybys - the first one being the best and VERY CLOSE as you can see from my pic below.

Throngs of people stopped what they were doing to see the once-in-a-lifetime spectacle of Discovery flying for the last time. The sheer size of the Shuttle Carrier Spacecraft (SCA) - a heavily modified Boeing 747 - and Discovery piggybacked, was, well, spectacular.

I have seen Challenger at the mate-demate facility at Edwards Air Force Base in California (still have the slides that I took through my 8-inch telescope), Endeavour on a night launch in 1995, and Enterprise at Udvar-Hazy. I am sure I will see Atlantis at the Kennedy Space Center someday.

But to see the workhorse of the shuttle fleet, just as she looked after return from orbit - seared, used and FLOWN - was impressive. Discovery will be on display at Udvar-Hazy in just that mode - as if she had just returned from space - for generations to see.

The shuttles are part of history now, no longer making it as they fly in space. We must await the next generation of manned spacecraft - Orion- to see what it can accomplish in space. I have watched Mercury, Gemini, Apollo, Skylab and Space Shuttle. I eagerly await the sight and sound of "fire on the pad' as the next generation of astronauts and spacecraft hopefully will go where no one has gone before and return to where we have been - the Moon.

Welcome Discovery, your flying mission is done. You now will inspire and amaze all who look upon you. Her new mission starts on April 19, 2012 at the Udvar-Hazy Air and Space Museum. 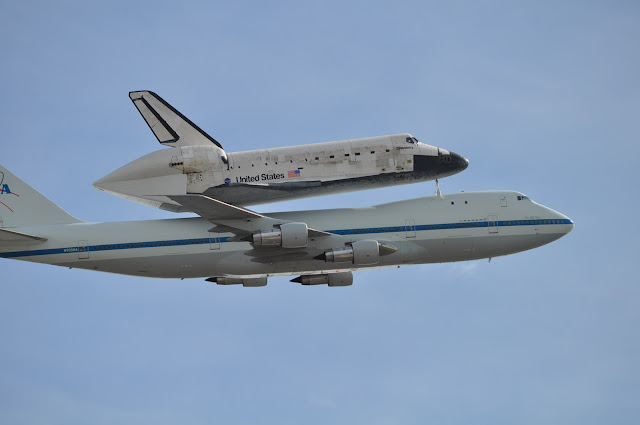