Details are here as well as all of the other projects you can help with.

With the Moon racing towards the Sun for next Tuesday's total solar eclipse the night sky beckons us right after it gets dark.

If you are fortunate enough to live in a dark sky location or are on vacation where the sky is dark, you are in for a real night sky treat - the Milky Way.

Our home galaxy is visible now in both hemispheres as a band of milky white light cut by seemingly empty patches of sky which is really huge bands of dust.


80-90 % of people on the North American continent cannot see the Milky Way due to light pollution. SO if you get to a dark sky site this summer make sure you look for the Milky Way in the sky.

Sky Guy Greg
Posted by Sky Guy in VA at 11:45 AM No comments: Links to this post

India's Indian Space Research Organization (ISRO) has announced the July launch window for its next mission to the Moon - Chandrayaan-2 - which will include an orbiter and India’s first soft lander and rover.


An artist’s rendition of the Vikram lander on the lunar surface. (Image credit: ISRO
The mission is scheduled to launch on July 15 at 2:51 a.m. India Standard Time which is July 14, 5:21 p.m. EDT. This is just two days before Apollo 11 launched.

Touchdown is scheduled for September 6 at -71 S latitude making this the farthest south lander ever.

If successful India will become the fourth country to soft land on the Moon - US, USSR, China have done so so far.

The landing area is also where Russia plans to land Luna 24 at some point in the future.

Posted by Sky Guy in VA at 11:44 AM No comments: Links to this post

Watch NASA's next rover destined for Mars - Mars 2020 Rover, complete with a helicopter drone -
being built.

Email ThisBlogThis!Share to TwitterShare to FacebookShare to Pinterest
Labels: MARS 2020 ROVER BEING BUILT

The good news here is that Americans are realizing the real threat from asteroids - Chelyabinsk and Tunguska anyone? The bad news is that human exploration, especially of the Moon, is not seen as its potential to benefit humanity....it is viewed as "we've been there and done that". Americans need to realize that we NEED to go back to the Moon and STAY this time. The Moon is THE stepping stone for the creation of a new economy and territory.

If the US doesn't do it, China will. There is room for all Nations just like Antarctica.

How did NASA put men on the moon?

One harrowing step at a time.

This is a great article with glorious photographs. Details of Apollo 11.

Posted by Sky Guy in VA at 11:13 AM No comments: Links to this post

Enjoy the view from space of how the Earth's orbit around the Sun leads to the seasons.

Get all the details here.

Sky Guy Greg
Posted by Sky Guy in VA at 10:30 AM No comments: Links to this post

Continuing with the Moon today here is a video about why the Moon "smells like gunpowder" as famously described by Apollo 17 Commander Gene Cernan.

How will astronauts lend aid to an incapacitated colleague while on the lunar surface?


Read this fascinating story about how underwater testing of a design for the Moon produced potentially life saving results for lunar explorers.

Lunar mission design will have to provide medical  and rescue capabilities such as these. It is all part of going back to the Moon to stay, survive and thrive.

But for now enjoy this great video.

With summer solstice almost upon us - June 21st and the start of summer at 11:54 A.M. EDT - we have a nice viewing treat tonight.

The almost Full LRO Moon will be near bright Jupiter in the southeast sky after sunset. The Moon will be Full on Monday at 4:31 a.m. EDT.

Traditionally this would be the Full Strawberry Moon but in honor of LRO's 10th anniversary since launching on June 18, 2009, those associated with LRO have added LRO to the list of June Full Moon names.

I will be at NASA Goddard Spaceflight Center to celebrate LRO's anniversary. I will have a special blog on June 19th to share regarding that event and LRO.

Get out and enjoy the sky view. If you have a clear western horizon Mercury and Mars will be very low on the horizon. Details are in the NASA link above.


The Apollo 11 in real time website is live! This is not a drill! Hats off to @BenFeist for this tremendous accomplishment! Use a computer but a phone will do! #Apollo50 @NASA @SkyGuyinVA @Neal148409276 @Ryan_N_Watkins @JimBridenstine @DrBrianMay https://t.co/EhEdcS60zt
— Noah Petro (@nepetro) June 15, 2019

For those who want to relieve, or experience for the first time, Apollo 11 in real time, here you go.

A LOT of work went into making this possible, including mobile phones, so set aside some time and live history in real time. This is a very valuable resource and offers quite a few options on what to see.

Enjoy your real time with the history of Apollo 11. Be sure to bookmark this as you will not be able to fully appreciate it in just one sitting.

I got goosebumps listening to and seeing the launch. I will be back for more that is for sure.

This really is an accomplishment for future generations (and us) to enjoy.

I took my first ever astropics using an iPhone 6s (dinosaur camera) and a telescope. I have to say I am pretty amazed by the results. 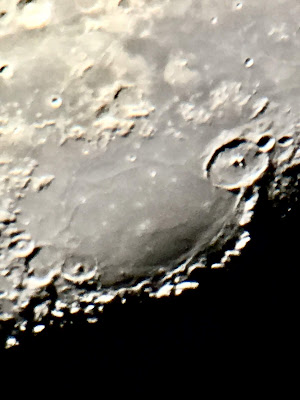 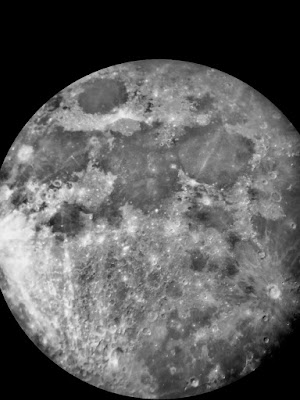 The sky conditions were LOUSY due to a passing cold front and high winds. You could see the shimmering in the eyepiece and iPhone! BUT, the results were still pretty amazing, especially the second shot.

Using an adapter to hold the phone - provided courtesy of astroshop.eu.com - the iPhone takes a photo of the eyepiece image with amazing results. You should be able to do this with a spotting scope and binoculars if they are mounted and you have a good cell phone holder like the Celestron  NexYZ

I will be back out tonight and hope to get the planets Jupiter and Saturn.

Posted by Sky Guy in VA at 3:49 PM No comments: Links to this post

Enjoy this #TBT video and story.


Sky Guy Greg
Posted by Sky Guy in VA at 12:20 PM No comments: Links to this post

Enjoy my pics of Jupiter from last night: 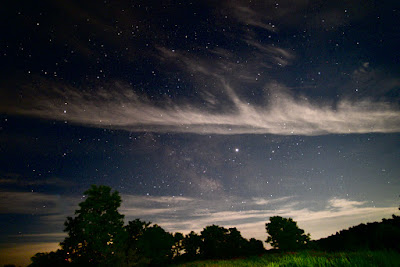 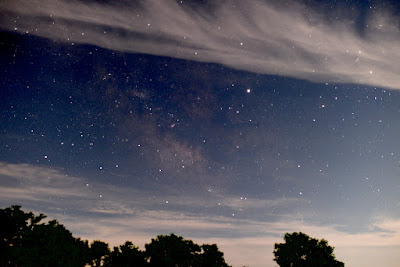 Here's a story to make you think.

Astronomers will be watching the Skies!
Posted by Sky Guy in VA at 5:00 PM No comments: Links to this post

Jupiter will be at its closest to Earth for all of 2019 tonight.

SCIENCE ON THE ISS

Yesterday was about get away vacations on ISS.

Today it is about the science that is done aboard ISS.

Here is a mission I can hardly wait to here the results of. METEOR has a LOT to tell us. I am waiting for an update from SWRI.

Posted by Sky Guy in VA at 1:08 PM No comments: Links to this post

NASA will be flying vacationers to the International Space Station.

You will definitely have a view that is out of this world!

Cost: Transportation costs TBD; NASA’s pricing policy chart shows it will be about $35,000 per night per person according to the article.

Use your credit card to pay and get millions of points - LOL.
Posted by Sky Guy in VA at 11:21 AM No comments: Links to this post

LEARN ABOUT THE AURORA

Here's a nifty video about the Aurora - amazing to witness in person.

Email ThisBlogThis!Share to TwitterShare to FacebookShare to Pinterest
Labels: Aurora

Today,  June 8th, is World Ocean's Day. Enjoy this mesmerizing video from NASA that shows the ocean currents of the planet.

So far in my life I have traveled nearly 200,000 nautical miles across the planet's oceans and seas aboard warships and cruise ships. I have sailed in all five oceans and many seas. Earth is a water planet with 70+% water coverage. The oceans account for 97% of the planet's total water. It is such a beautiful expanse of which I never tire of experiencing. The connection between Earth, sky and ocean is felt strongest when at sea.

New research has revealed that comets may have significantly contributed to the origin of our planet's oceans. Countless cometary impacts after the Earth formed would have deposited a great deal of water. We know water is everywhere in the solar system so this makes complete sense. What a wonderful cosmic connection.

We are in a time of climate change and plastic bombardment.  Humanity, all of it, is running out of time to change its ways with regard to fossil fuel and plastic pollution.

If you are near an ocean or sea, take time to contemplate their magnificence.

Remember, the planet doesn't need us, we need the planet.

I was up at Shenandoah National Park yesterday working on a very exciting project so I didn't get this blog out.

Astronomy played a pivotal role in the planning of D-Day. The phase of the Moon and the actions of the tides had to be taken into account.

I hope everyone took time to pause and remember the sacrifices made 75 years ago that literally saved the world. 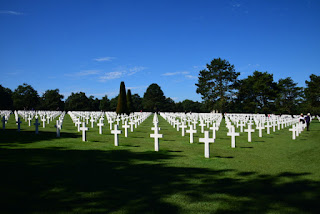 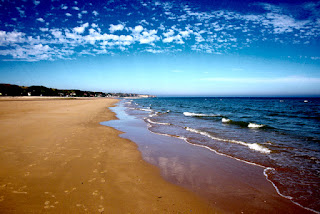 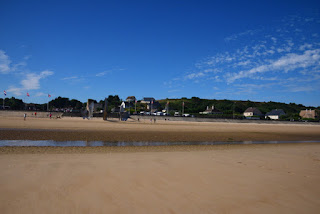 Enjoy this article and video on how Sun-Moon interaction produces lunar sunburn.

SOME NEWS ON THE SUN

Enjoy this quick did bit on the Sun.

Maybe in a few years we will finally know the mystery of coronal heating.

As we get closer to July 20th there will be items coming out to commemorate the 50th anniversary of Apollo 11 landing on the Moon.

Here is a wonderful compilation of video and audio that is worth your time.

Sky Guy Greg
Posted by Sky Guy in VA at 10:16 AM No comments: Links to this post