2020 is FINALLY winding down to its last month and tonight its last lunar eclipse. Weather is going to spoil this penumbral lunar eclipse of the Beaver (or Frost) Full Moon for some of us on the East Coast of the US due to forecasted 100% chance of rain. You will have to check your local area weather cast to see if there is a chance to see it. Even if it is a "partly" or "mostly" cloudy forecast it is worth checking the sky for yourself, especially at Greatest Eclipse.

We did enjoy a penumbral eclipse of the Full Buck Moon on July 5th this year which I was able to photograph as you shall see in the following EarthSky.org article.

For those able to see the eclipse the Full Beaver Moon will undergo a very slight shading probably undetectable by eye for most observers. The Moon will skim through the outermost pale fringe of Earth's shadow, with maximum eclipse and greatest amount of shading of the Moon, coming at 4:33 a.m. EDT Monday morning. 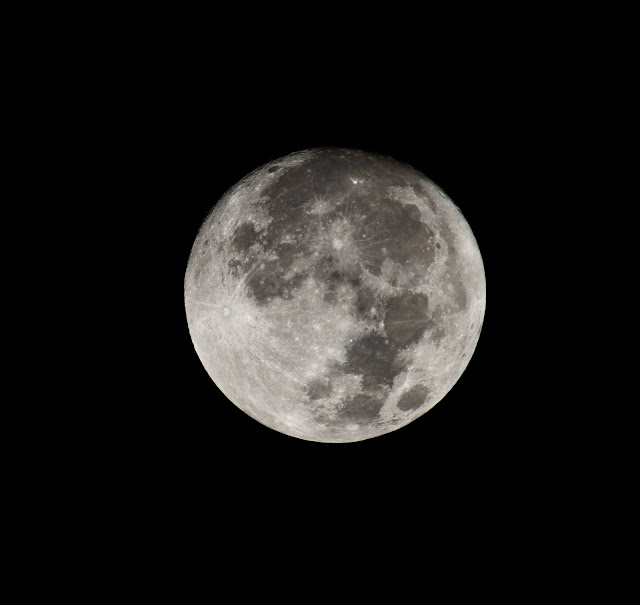 This photograph of the 98.9% illuminated Moon was taken 24
hours before the moment of Greatest Eclipse that will
occur at 4:43 am EDT November 30, 2020.
Greg Redfern

Try using binoculars or a telescope to view the Moon at maximum eclipse.

At maximum eclipse the Moon will be almost entirely in the Earth's penumbra. Traditionally, a penumbral eclipse is considered invisible unless the Moon's limb reaches about halfway across the penumbra. For this eclipse it will  be 83% immersed in Earth’s penumbra. Telescopic and large zoom lens photos, processed to reveal very weak contrast changes, might succeed in bringing out evidence of this event if your eyes don’t.

Sadly I should have been writing this article at sea off the coast of South America headed for Antarctica and the follow on December 14th total solar eclipse. I was to be the staff astrophotographer for the voyage but the Covid-19 pandemic cancelled it. These two eclipses encompass an eclipse season that always occurs when an eclipse takes place.

Mark your calendars now for two big sky shows in December. The Geminid Meteor Shower will occur the night of the 13th-14th and a week later is the historic grouping of Jupiter and Saturn. I will provide full details on both of these not to be missed events.

Sky Guy in Soon To Be Cloudy VA